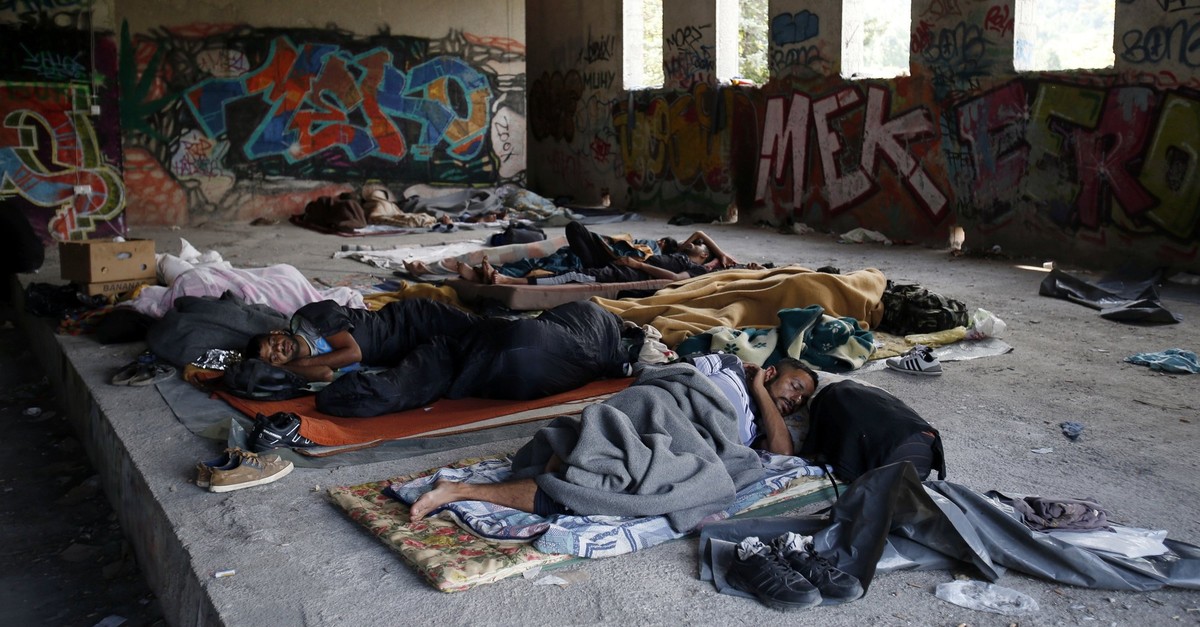 In this photo taken on Tuesday, Aug. 14, 2018, migrants sleep on the floor of a makeshift migrant camp in Bihac, 450 kms northwest of Sarajevo, Bosnia. (AP Photo)
by Associated Press
Jun 14, 2019 11:54 pm
The U.N. office in Bosnia said Friday that authorities in the country have transferred 282 migrants who were squatting illegally in the northwestern town of Bihac to a tent camp near an area infested with land mines left over from a 1990s war.

U.N. officials said in statement that the Vucjak camp is "unsuitable for human habitation." In addition to land mines, the camp sits on top a former landfill.

Bosnian police found the migrants Friday staying illegally in two privately-owned houses and moved them to the tent camp. Three migrants were arrested for resisting police who raided the houses, finding 180 migrants in one and another 102 in the other. Four policemen were injured during the raid.

Authorities said they transferred the migrants to a tent camp in the area where they will be provided with food, basic facilities and medical care.

But the U.N. said in its statement that the Vucjak camp "poses very significant health and safety risks and is currently not equipped to accommodate migrants and refugees in accordance with international standards."

"The site is located very close to land mine infested areas" from the 1992-95 war, the statement said. "There is also a high fire and explosion hazard due to the possible presence of methane gas underground, as the site was a former landfill."

The U.N. urged the Bosnian authorities to allow the migrants to return to Bihac until a more suitable location is found.

"Unless these two serious risks are assessed and eliminated by the relevant authorities, the site is unsuitable for human habitation," the statement said.

There was no immediate reaction from Bosnian authorities.

Thousands of migrants fleeing war and poverty have been stuck in northwestern Bosnia, which borders European Union member Croatia, as they look for ways to move toward Western Europe.

Bosnian police have stepped up control of migrants in the area following a spike in incidents, including fights involving dozens of people. They said the operation will continue in the coming days.

Bosnian authorities are struggling with the influx in the impoverished Balkan country that is still recovering from the 1992-95 war. Aid groups have warned of a looming humanitarian crisis.