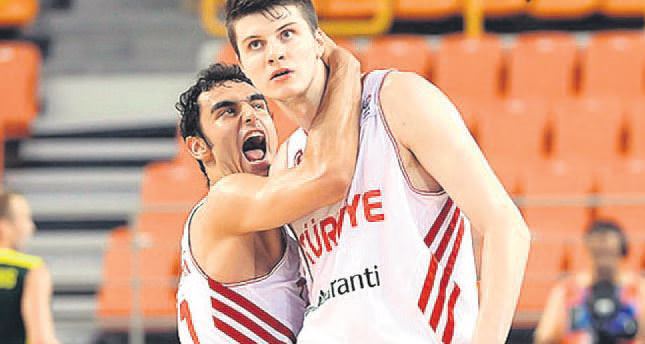 by AA Jul 22, 2014 12:00 am
The Turkey National Under-20 Basketball Team won 2014 FIBA Europe Under 20 Championship, defeating Spain 65-57 on Sunday night on the Grecian island of Crete. Turkey gained victory against the Spaniards thanks to a strong collective effort, especially in the last quarter. Turkish shooting guard of Anadolu Efes, Cedi Osman was the most effective player last night as he scored 20 points and grabbed seven rebounds. He was followed by Talat Altunbey, who scored 10 points, and Tayfun Erulku, who finished the game with nine points, three assists and four rebounds.

Spain's top scorer was Oriol Pauli, with 17 points, and five steals, as well. In addition, the Hernangomez brothers contributed for Spain, with both defensive and offensive plays. Guillermo Hernangomez scored nine points and grabbed eight rebounds, and Juan Hernangomez scored eight points and had seven rebounds. But Spain's efforts were not enough to win the final, giving Turkey the FIBA Europe Under-20 Championship for the first time ever. After the buzzer, jubilant Turkish youngsters celebrated on the court.

Turkish guard Cedi Osman was selected the "Most Valuable Player" of the tournament. Serbia came in third after defeating neighbours Croatia 79-66 in the third place playoff. The Serbian players' bronze medals were given out by a Serbian basketball legend, Dejan Bodiroga.
Last Update: Jul 22, 2014 1:07 pm
RELATED TOPICS