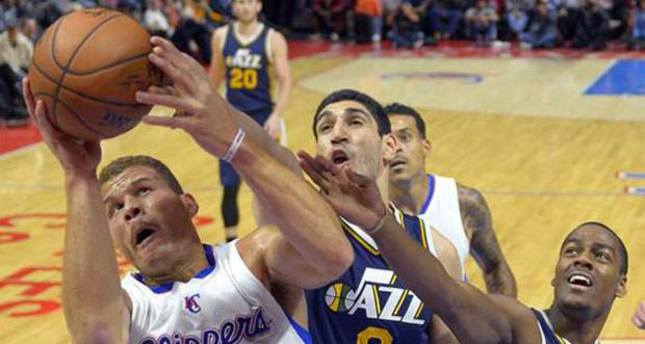 Turkish stars, Hedo Türkoğlu and Enes Kanter faced off in Los Angeles on Monday night as Türkoğlu's LA Clippers beat Kanter's Utah Jazz 107-101 at the Staples Center. The Clippers won after blowing much of a 15-point lead, and went 3-1 after four games in five nights to start the season. Türkoğlu was on the court for just three minutes and 31 seconds and completed the game with just one assist. While Türkoğlu struggled for playing time, Kanter was a big part of the Jazz's efforts, chipping in with 17 points and nine rebounds, however he could not prevent his team's defeat. One of the smallest men on the court was huge on the boards.

Clippers 6-foot point guard Chris Paul notched the NBA's first triple-double of the season and his first with the Clippers, finishing with 13 points, 12 assists and 10 rebounds. He showed no ill effects after spraining his left foot a night earlier. "We won, so that's all that matters," said Paul, who got two and a half hours of treatment on his foot to be able to play. Paul was the leading rebounder for the Clippers, who got outboarded 51-37. "When he's going after rebounds like that, I guess it's hard for our bigs to crash," Utah's Gordon Hayward said.

"A lot of those rebounds were defensive, so when our bigs are crashing that can be a load down there." Blake Griffin scored 31 points, Jamal Crawford added 19 to go over 15,000 in his career and Reggie Bullock scored all of his 12 points on 3-pointers for the Clippers. Crawford had missed Sunday's loss to Sacramento because of bruised ribs and he said he still feels only 70 percent. He returned to go over the milestone on a floating jumper at 6:53 of the fourth and has totaled 15,003 points in his 14-year career. "It's a pretty good number," Crawford said. "I've been really consistent." Hayward scored 27 points and Alec Burks 16 points for Utah, which has lost three of four. "The kid is amazing," Clippers coach Doc Rivers said of Hayward.

"I've had a man crush for two years." There were eight lead changes, but the Jazz never led by more than two points. Their last lead came on Rudy Gobert's dunk early in the fourth. They got within one twice more, but the Clippers found ways to keep extending the lead. "There were a lot of breakdowns, and that can't happen against a team like that," new Jazz coach Quin Snyder said. "They know what they're doing and they're really connected, so it's tough to withstand that. You expend a lot of energy coming back, and they made plays down the stretch." After struggling offensively in their first three games, the Clippers got untracked by shooting 51 percent and making 15 of 17 free throws. The Jazz ran off 13 straight points to tie the game at 62 in the third. Hayward hit a 3-pointer and added a steal and layup in the spurt. Griffin and Paul combined to score eight straight before Bullock's fourth 3-pointer kept the Clippers ahead 73-70 going into the fourth.