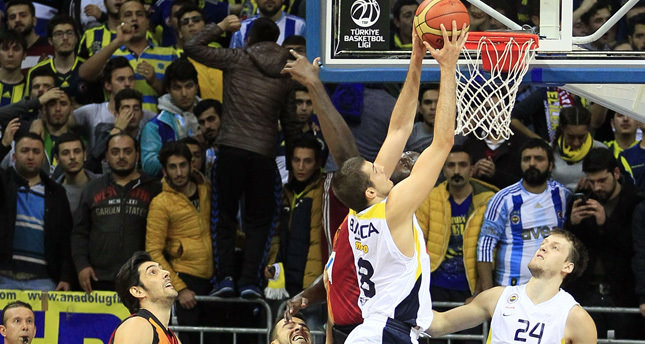 Fenerbahçe Ülker started the match effectively with their pressing defense coming to the fore in their 8-0 start. But they couldn't prevent Carlo Arroyo scoring at will and Galatasaray made up the difference to make the score 10-9. In the last four minutes of first quarter, Fenerbahçe made the score 14-12 before Zoran Erceg's 3-pointer put Galatasaray in front 15-14 but with consecutive baskets Fenerbahçe completed the first quarter 20-17. Fenerbahçe Ülker started the second quarter on a roll, making the score 27-17 in the first two and a half minutes. The Yellow-Reds tried to make up the difference with 3-pointers. But Fenerbahçe Ülker did not have diffculty in scoring and completed the first five minutes with a 34-25 lead. Fenerbahçe Ülker found easy baskets thanks to fast attacks and gave no chance to their rivals to score. They went into the locker room with a 50-31 half-time advantage.

In the second half, Fenerbahçe started with an Andrew Goudelock basket that increased the deficit to over 20 points to 52-31. Galatasaray Liv Hospital responded this with two 3-pointers. But Fenerbahçe controlled the game with solid work from Oğuz Savaş. In the last quarter, Galatasaray's decreased the difference to 11 points behind Kerem Gönlüm's points. But Galatasaray Liv Hospital could not prevent Bogdan Bogdanovic's scoringand Fenerbahçe made the score 76-60. Fenerbahçe Ülker got an edge over Galatasaray Liv Hospital 77-63 in the last five minutes. However Galatasaray decreased the difference to eight points in the last 90 seconds of time. Fenerbahçe held firm to finish the game 85-74. Serbian Nemanja Bjelica led his team to victory with 18 points and five rebounds (on 8-of-9 shooting from the field). Turkey international Emir Preldzic contributed with seven points and seven assists for the victors. Fenerbahçe Ülker's coach Zeljko Obradovic used a ten-player rotation which allowed the starters to rest ahead of their future games. Puerto Rican point guard Arroyo replied with 15 points, five rebounds and five assists and Serbian Zoran Erceg added 18 points in the effort for Galatasaray. Four Galatasaray players scored in double figures.