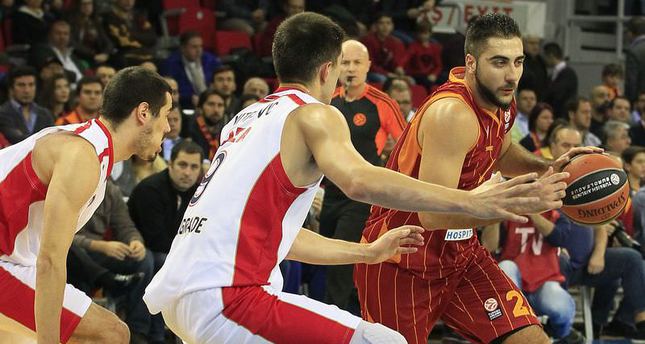 by daily sabah
Nov 22, 2014 12:00 am
A Red Star fan who was stabbed during a scuffle between fans in Istanbul died on Saturday morning, Turkish police said.

It was reported that the Serbian Red Star basketball team has requested 70 tickets to be reserved for the Euro League match with Galatasaray LIV, which took place in Abdi İpekçi Arena, in Istanbul, on Friday evening. However, around 250 Red Star supporters without tickets showed up at the arena, but were denied entry into the match in accordance with league procedures, report stated.

A scuffle took place amongst the fans according to a statement by the Istanbul Police Department. Accordingly, rival team fans started throwing stones and bottles at each other while the police tried to keep the two sides apart.

Marko Ivkovic, 25, was stabbed in the chest despite police's efforts to suppress the clashes. It was reported that Turkish health officials tried to save Ivkovic for five hours but he died as a result of massive bleeding.

Turkish Prime Minister Ahmet Davutoğlu has called his Serbian counterpart Aleksandar Vucic and expressed condolences over the incident. He stated that he was sorry about the killing of Ivkovic while he assured Vucic that the Turkish authorities would take all measures to find the perpetrator.

Euroleague has requested both teams to release information about the incident so they can determine the measures that need to be taken.

Galatasaray has expressed deep sorrow over the death of Ivkovic and emphasized that it is unacceptable for such violent incidents to cast a shadow on sports as hope and peace should prevail in sports fields.