Fenerbahçe march on while Efes freeze in Russia 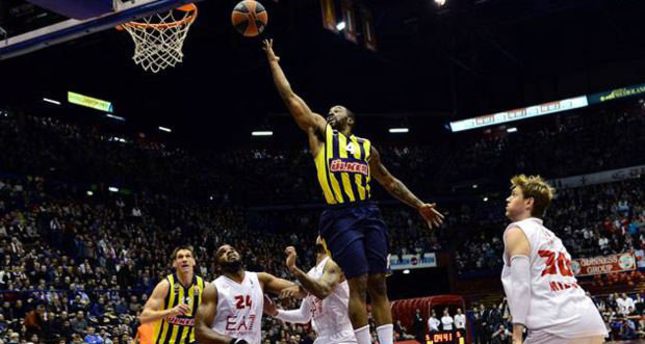 by Kenny Laurie Nov 22, 2014 12:00 am
After winning with virtuosity a week ago, Fenerbahçe turned to the full team ethic on Thursday night as they beat EA7 Emporio Armani Milan 80-74 in Milan. A week ago, Andrew Goudelock led the Istanbul giants to a superb win over Bayern Munich as he set the EuroLeague record for the most 3-pointers made in a game (10). But Milan faced a different foe on Thursday, with Fener coming at them from all angles in a conclusive win in which no Fenerbahçe player scored more than 14 points. Whether it was Jan Vesley highlight-reel dunks, Goudelock and Semih Erden's perfect shooting percentage or Nemanja Bjelica's work down low, Milan were unable to catch up with a well-tuned Fenerbahçe side. Fenerbahçe needed to spread the ball around as Milan worked hard to stifle the red-hot Goudelock. The Italians succeeded insofar as Goudelock managed only five shots and five assists, but his team-mates stepped up and shared the ball to take down the Italians. Fenerbahçe now boast a 4-2 record which should put them in a strong position to advance from the group stage, quite a feat considering the quality of the teams in their group - Panathinaikos Athens, PGE Turow, Bayern Munich and Barcelona. Only Panathinaikos sit above Fener in Group C. Good though the performance was, it required some real composure in the last minutes to take the win. Bjelica was the man to step up, hitting six points in the last minute as well as putting in a key defensive turn. MarShon Brooks, formerly of the Boston Celtics and the Brooklyn Nets, tried to rally Milan to the win, scoring 17 points while he tried to overturn a double-digit second half deficit. Milan got as close as three points, with the score at 74-71 with just 21 seconds left. Bjelica and Hickman made their free throws however to prevent a comeback. Elsewhere, Anadolu Efes were unable to follow up their win over Real Madrid from last week with a win on Thursday as they went down 76-64 to Unics Kazan in a tight affair. The Istanbul side will have kicked themselves after the game after they let a 15-point lead slip. Dario Saric stepped up in the absence of team fulcrum Nenad Krstic with 13 points and nine rebounds. Having led for much of the match, Unics Kazan finally took the lead with five and a half minutes left, when Keith Langford knocked down a step-back 3-pointer. Saric levelled it up later but Langford did the damage from the free throw line last on to make Anadolu Efes 4-2 in Group A, keeping them in second place behind Real Madrid. Efes' Serbian coach Dusan Ivkovic expressed his displeasure after the game. "I am happy to be back in Kazan, in Russia, but I did not like the way we played," said Ivkovic. I think that Anadolu Efes was a better team for three quarters and controlled the game. We played good defense. And it's definitely very difficult now to explain, why we stopped playing defense. We will have to work a lot to qualify for the Top 16. I wish good luck to Evgeny Pashutin and his team. He was my assistant in Moscow. He is my good friend."