Records fall for Red Star but Gala wins the game 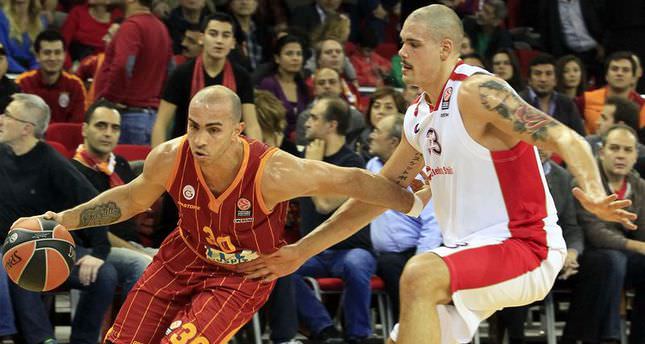 by daily sabah
Nov 24, 2014 12:00 am
Galatasaray Liv Hospital coach Ergin Ataman has described his side's double overtime 110-103 win over Red Star (Crvena Zvezda) as "one of the best games I have ever watched." The win put Galatasaray in joint second place with Zvezda in their group following their stunning and record-breaking win. While Ataman conjectured that star point guard Carlos Arroyo may have broken the record for a 35 year old, with the Puerto Rican playing 50 minutes nonstop. In reality records fell elsewhere.

Zvezda star Marcus Williams set a new EuroLeague record with 17 assists while Luka Mitrovic set a club record 30 points while Boban Marjanovic's 17 rebounds was the biggest EuroLeague total in three seasons. While the records fell for the visitors, it was Galatasaray that made all the moves. A seesawing game that spanned two overtimes fell the home side's way thanks to late baskets from Zoran Erceg and Arroyo, who hit three big late 3-pointers. While the win was crucial for Galatasaray's hopes of getting out of the group stage, coach Ataman couldn't help but enjoy the spectacle.

"It was an incredible night, maybe one of the best games I ever watched in my coaching career," said Ataman. "We played really good in the first half. But at the beginning of the second half we were too slow to come back on defense. Red Star took control of the game and had a 10-point lead. We had excellent performances from our three guards, Carlos Arroyo, Sinan Güler and Ender Arslan. I think Arroyo made history at the age of 35 by playing 50 minutes nonstop. Red Star played with good percentages in the end. They really did a great job for most of the game. Zoran Erceg hit an incredible 3-pointer to save the game. The luck was on our side. But we were better in the second overtime. It would be better if we can finish the game by nine points. But anyway, this is a good win."

Erceg had a team-high 32 points scoring all 14 of his free throws, while Arroyo had 26 points, scoring six of his, rather excessive, 17 3-point attempts. Kerem Gönlüm and Ender Arslan had 15 points each. "It was an excellent game for both sides," Erceg said. "Red Star is a young but talented team. They fought really well. We struggled especially in the second half. But in the overtime we used experience to our advantage. It's good to win and keep chasing for the Top 16." Galatasaray now hold the joint second spot with Zvezda and Neptunas Klaipeda with three wins and three losses.
Last Update: Nov 24, 2014 1:50 am