The killer of Red Star will be caught, PM says 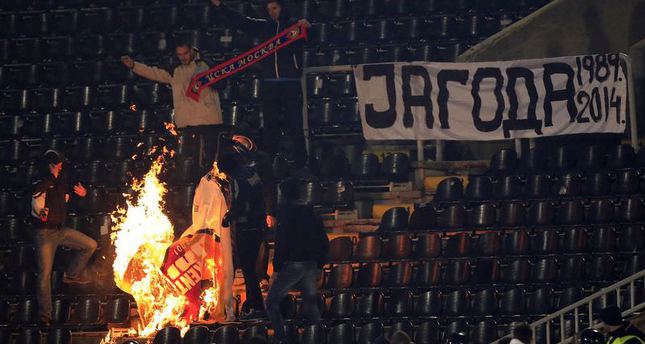 A fan of Red Star was stabbed to death when an argument between rival fans turned violent. PM Ahmet Davutoğlu offered his condolences to Serbian Prime Minister Aleksandar Vucic and assured him that Turkish authorities would do everything to arrest the perpetrator of the attack

Turkey's Prime Minister Ahmet Davutoğlu offered his condolences to Serbian Prime Minister Aleksandar Vucic in a telephone call Saturday over the death of a Serbian basketball fan that was stabbed to death in Istanbul. According to a statement from the Serbian prime minister's office, Davutoğlu assured Vucic that Turkish authorities would do everything to arrest the perpetrator of the attack and bring him to justice as soon as possible. Vucic expressed his astonishment over the incident and urged the Turkish premier to find the murderer of the Serbian citizen soon. Also, the Serbian prime minister denounced Turkey's Galatasaray Liv Basketball Club manager, Ergin Ataman, for calling Serbian fans "terrorists."

Expressing his sadness over the killing of Ivkovic in a press conference after the match, Ataman stated that he used this expression without being aware of the killing of a Serbian fan. "When I was making my statements, I did not know that a youth had been killed. If I had known, I could have offered my condolences before my speech. It is an unfortunate development which has drawn me into an incident which has nothing to do with sports. I am against any kind of terrorism in sports and I condemn the Serbian consul general's remarks about me." Ataman was referring to the Serbian consul general calling him a terrorist. "The incident has reached political dimensions. Meanwhile, the Serbian President pointed at me as a target by saying 'Ergin Ataman will not enter Serbia anymore,' I request that this statement be reversed as soon as possible," he continued.

Zoran Markovic, Serbia's consul general in Istanbul, said that Ataman's statements a during press conference were unacceptable. Emphasizing that eye witnesses confirmed the incident, the Serbian consul general continued by saying, "Turkish police forces and the Galatasaray board were informed and we [the Serbian consulate] were all prepared for any scenario." He added that they knew that no-extra tickets were given to Serbian fans and that they found this unacceptable. Galatasaray's basketball branch coordinator, Murat Özyer, also expressed his sadness and added that EuroLeague officials requested Galatasaray Liv Hospital and the Turkish Basketball Federation send a report to them about the incident.

Marko Ivkovic, 25, was at the Abdi Ipekci Arena in Istanbul to support his Belgrade team Crvena Zvezda-Red Star against Galatasaray Liv in the Turkish Airlines EuroLeague basketball match on Friday. Ivkovic was stabbed in the chest when an argument between rival fans turned violent after Red Star fans allegedly arrived at the venue without tickets for the game, the Istanbul police department's statement said. The violence began with rival team fans throwing stones and bottles at each other, the statement added. Police had made efforts to keep the two sides apart and Red Star supporters were moved away. However, despite the efforts, the young Red Star fan was stabbed, the statement said.

The Turkish Basketball Federation published a condolence message for the deceased Serbian fan. Serbia summoned the Turkish ambassador to Belgrade, after relations between the two countries were rocked by the crime. Ambassador Mehmet Kemal Bozay told Anadolu Agency reporters after his meeting that he offered his condolences and said: "I told them the investigation into the incident is ongoing and that I will inform them of any developments."
Last Update: Nov 24, 2014 1:46 am