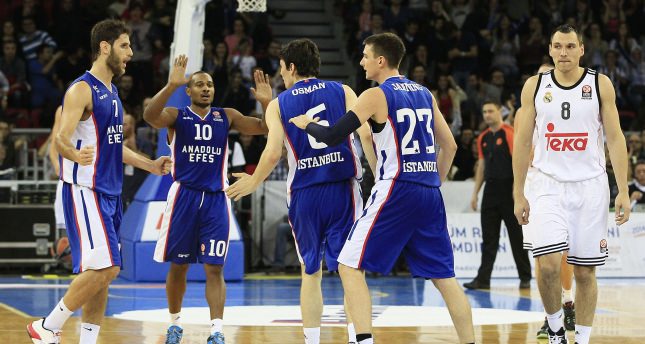 by Daily Sabah Nov 28, 2014 12:00 am
Anadolu Efes take on lowly Dinamo Banco di Sardegna Sassari tonight as they look to ensure an easy passage to the next round with a high seed. The Istanbul team still trail Real Madrid in the standings, with the Spaniards enjoying a 5-1 record to Efes's 4-2, but they can further distance themselves from the chasing pack with a win in their home stadium tonight. While Sassari would appear on paper to be easy pickings, especially considering their 1-5 record and status as Group A basement team, Efes coach Dusan Ivkovic has warned his team against complacency and highlighted their threat in transition. "We are approaching to the end of the regular season," said Ivkovic. "We have two games at home and two on the road remaining. We will play against Sassari at home now. I think we have to be very concentrated. Sassari is playing great transition basketball. So we have to be very careful on transition defense. "The main characteristic of Sassari is transition. They are also very athletic individually. They are at the top among 24 teams in steals by 12 steals per game and at the second place in offensive rebounds by 14 per game. It means we have to control the game very well. I expect a really good game. Sassari is a very good team and having a very good coach."

Aside from Nenad Krstic, who is still sidelined with a broken arm, Efes have a virtual clean bill of health while supporters can enjoy a fierce matchup between Dario Saric and Jeff Brooks, two of the most versatile and gifted forwards in Europe.

Efes will need to be prepared for a team who are fighting for their lives. While Efes battle for a favorable seed, Sassari are fighting to stay in the competition.

Elsewhere, Galatasaray Liv Hospital can help push themselves away from the chasing pack as they take on 1-5 Valencia Basket. Gala sit on a 3-3 record alongside Crvena Zvezda Telekom and Neptunas Klaipeda, who hold the joint second spot.