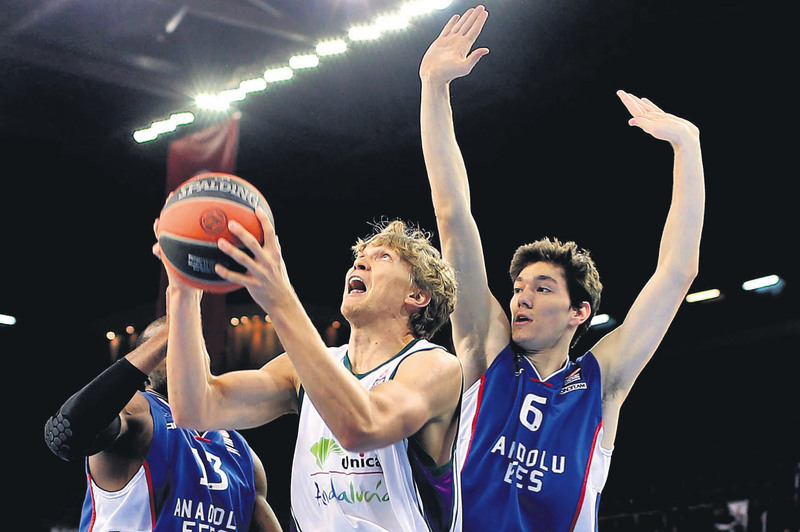 by Kenny Laurie Mar 06, 2015 12:00 am
Anadolu Efes coach Dusan Ivkovic has told his players to control the game tonight as they take on Unicaja Malaga in another important Top 16 game. The two sides have played each other six times in the competition down the years, always in the Top 16, with each team taking three wins each from the contests. Efes are trailing somewhat in Group F with a 4-4 record, sitting in fifth place jointly with Laboral Kutxa Vitoria behind Fenerbahçe, CSKA Moscow and Olympiacos. The Istanbul side can be confident of victory, however, with Malaga having turned a poor Top 16 campaign this season. Despite superb domestic form, Malaga are 1-7 in the Top 16. Ivkovic highlighted Malaga's skill at offensive rebounding and called on his players to be judicious and assertive. "The start of the second round of the Top 16 was not good for us and we [definitely] have a new opportunity consisting of six more games," said the Serb. "The first of them is Unicaja Malaga, which is playing great basketball in the Spanish League. One game on the road against them and we have to control the game. They are the best offensive rebounding team in the EuroLeague with 14.78 offensive rebounds per game. We have to take care of the rebounds and control the rhythm of the game."

Point guard Thomas Heurtel described the game as crucial and actually sees Malaga's poor form as something to fear, reasoning that the Spaniards will play without fear or pressure. "Everybody knows that it will be a crucial game," Heurtel said. "After losing to Laboral Kutxa in the eighth round of the Top 16, we badly need a victory to be closer to the playoffs. Because of Unicaja Malaga's position in our group, they will play against us without pressure. This may make the game more difficult for us, so we have to be very careful. They also played very good against us in the second game day of Top 16. Finally, we are only concentrated into a win and want to return back with a victory." Elsewhere, Galatasaray host Real Madrid in a crunch encounter at the Abdi İpekçi Arena. Five straight losses have sunk Gala down to the lower reaches of Group E to a 2-6 record while Real Madrid coast at the top with a 7-1 record.
Last Update: Mar 06, 2015 2:21 am
RELATED TOPICS