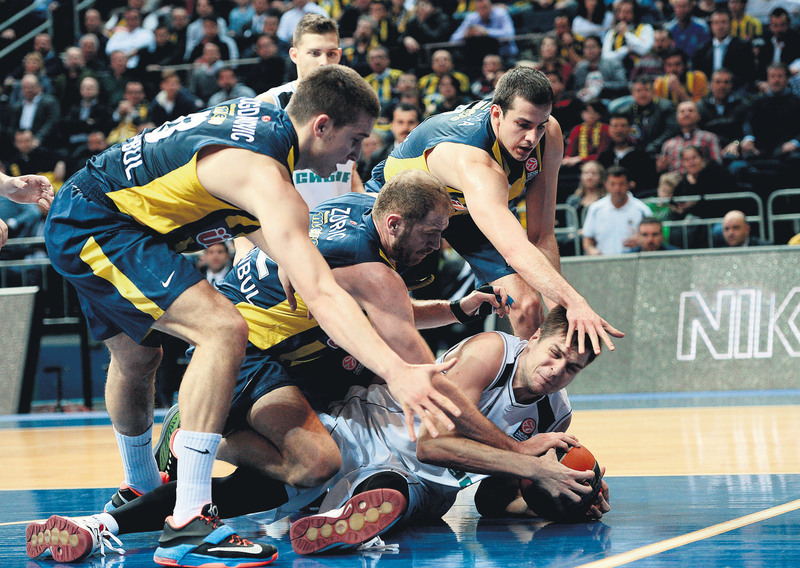 by Kenny Laurie Mar 07, 2015 12:00 am
Fenerbahçe picked up their sixth straight win in the Top 16 on Thursday night as they comfortably dispatched of Russian side Nizhny Novgorod 92-79 with Nemanja Bjelica starring. Despite Fenerbahçe now holding second place in Group F behind Olympiacos with a 7-2 record, Bjelica described the win as "needed," claiming that it was important the Istanbul side pick up a win in front of their home fans. Fenerbahçe may be enjoying a purple patch at the moment but much of that has been driven by their away form. The Serbian power forward, who finished the game with 16 points and a number of highlight plays, said the win was key for confidence ahead of a crunch tie with Galatasaray in the Turkish League on Monday before a game against Olympiacos. "We needed this victory in front of our fans because we won five games on the road," said Bjelica. "It was really important and it is really a pleasure to play with this crowd. We have to continue fighting; we have one more game in the Turkish championship before we get ready for Athens." Fenerbahçe were on top from the off, leading at the end of every quarter as well as blowing out the Russians in a rampant second quarter, which they won individually 32-17, allowing the hosts to take a 50-34 lead into half time. Coach Zeljko Obradovic praised his side's defensive performance as well as their "excellent" second quarter. "It was really important for us to play a good game tonight," said the Serb. "We had an excellent second quarter. We were pretty good especially in defense. But we started the third period bad. I always mention to my players the importance of motivation. Unfortunately we relaxed in the third quarter to give the opportunity to Nizhny to come back in the game. Then we started everything from the beginning. I had the chance to give the opportunity to all of my players. Everybody in the team has to be ready for a challenge any time. It's because we have still so many games in front of us." Bjelica led Fener in scoring with his 16 points while Trey Thompkins led all scorers with 22 points. The unlikely figure of Nikos Zisis led all players in assists with the big man handing out seven. Novgorod coach Ainars Bagatskis praised Fener after the game and credited Fenerbahçe's win to their hot 3-point shooting - 55 percent.

"Congratulations to Fenerbahçe Ülker," said Bagatskis. "They really had a great game from behind the arc. They shot with high percentages that we couldn't stop. They hit many big shots, especially in the beginning of the second quarter and then used the advantage of it until the end of the game. We were able to catch them later in the third quarter. But they repeated once again those big shots to win the game."
Last Update: Mar 07, 2015 2:15 am
RELATED TOPICS