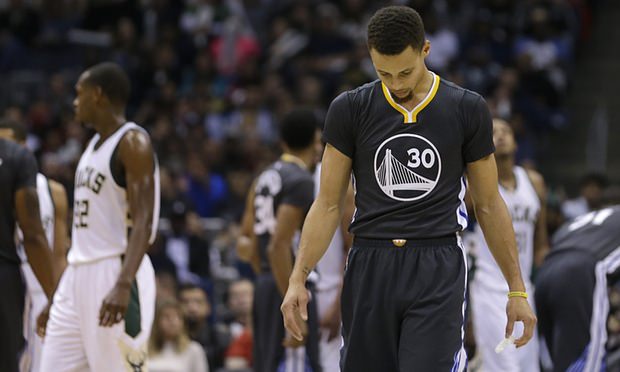 by Associated Press Dec 13, 2015 12:00 am
Golden State's record winning streak to start the season ended at 24 games when the Warriors were beaten 108-95 at Milwaukee on Saturday.

Their 28-game streak, counting the final four games of last season, also came to a halt, ending the Warriors' quest to reach the longest winning sequence in NBA history, which remains 33 by the Los Angeles Lakers in 1971-72.

Elsewhere, San Antonio put in a superb defensive performance in the first half to set up a big win at Atlanta, Boston ended Charlotte's winning streak in a result that tightened the fight at the top of the Atlantic and Southeast divisions, while Detroit extended its home winning streak to five by defeating Indiana.

Milwaukee, bottom of the Central Division, was an unlikely candidate to end Golden State's winning run, but got an all-round effort from the team, led by 28 points from Greg Monroe.

It also helped that the Warriors, perhaps fighting fatigue after needing two overtimes to win at Boston on Friday, were cold from 3-point range. They usually make 13 a night, but were just 6 of 26 from behind the arc in the final game of a seven-game road trip.

A miserly San Antonio gave up only 25 Atlanta points in the first half to lay the foundation for a 103-78 win at the Hawks.

Kawhi Leonard scored 22 points for the Spurs, who led 47-25 at halftime. The Hawks' total was the lowest for any team in any half this season, according to STATS. The previous low was Houston's 26 second-half points on Nov. 1 at Miami.

Manu Ginobili had 17 points for San Antonio, which has won six of seven.

Paul Millsap led Atlanta with 22 points, including 17 in the third quarter. No other Hawks player scored in double figures.

Avery Bradley scored 23 points and Isaiah Thomas added 21 points and 13 assists for the Celtics, who responded well after the double-overtime loss to Golden State on Friday.

The Hornets had a chance to tie the game late but Nicolas Batum's 30-foot jumper off a side inbounds play with 6.6 seconds remaining missed everything, and Evan Turner put away the game with a layup.

Batum's 21 points led the Hornets, whose lead in the Central was trimmed to one game ahead of Miami and Atlanta.

Detroit's Reggie Jackson had 21 points as the Pistons beat Indiana 118-96.

Ersan Ilyasova added 20 points for the Pistons, who had six players score in double figures.

George Hill led the Pacers with 14 points. Paul George finished with 13 on 4-of-16 shooting, missing all four of his 3-point attempts.

Washington ended a run of 11 straight losses to Dallas by winning 114-111 at the Mavericks.

Otto Porter scored a career-high 28 points and John Wall had 26 points and 16 assists for the Wizards, who beat the Mavericks for the first time since 2009.

Porter more than picked up the slack for the injured Bradley Beal, scoring 17 points during Washington's 39-point third quarter as the Wizards built a 21-point lead.

Wesley Matthews led the Mavericks with 28 points, including six 3-pointers.

The Los Angeles Clippers also ended a head-to-head hoodoo by defeating Brooklyn for the first time in eight attempts, winning 105-100.

New York's Carmelo Anthony tied a season high with 37 points, helping the Knicks rally for a 112-110 win at Portland.

Chicago's Aaron Brooks scored 15 points in the fourth quarter to rally the Bulls to a 98-94 victory over New Orleans.