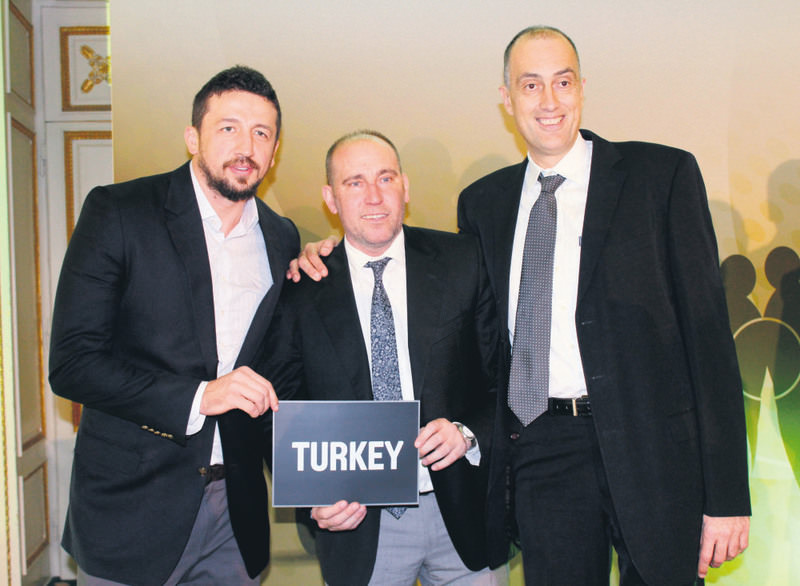 by Daily Sabah Dec 14, 2015 12:00 am
The FIBA Europe Board awarded Turkey the hosting rights for a group stage and the final stage of FIBA EuroBasket 2017. "This is a great day for Turkey and Turkish Basketball," Turkish Basketball Federation (TBF) President Harun Erdenay said. "I want to thank FIBA Europe President Turgay Demirel and the FIBA Europe Board for this show of confidence in the Turkish Basketball Federation. I also want to thank the government of the Republic of Turkey and Istanbul Metropolitan Municipality for their enthusiastic support of our bid. This is a tremendous opportunity for our federation and our sport, and I have no doubt that FIBA EuroBasket 2017 will leave a long-lasting and positive impact on our country and on international basketball."

Istanbul will host one of the tournament's four group stages and then the final round for the 16 teams that advance out of the group stage. The group stage will be played at Abdi İpekçi Arena. The final round will take place at the Sinan Erdem Dome, which hosted the final round of the 2010 FIBA World Championship. Finland, Israel, and Romania will host the tournament's other three groups. "Winning the silver medal at FIBA EuroBasket 2001 was one of the highlights of my career," TBF CEO Hidayet Türkoğlu said. "This event will set a new standard for sports events in Turkey, and just as in 2001, the 12 Giant Men will inspire a new generation of boys and girls to play basketball." Erdenay and Türkoğlu were teammates on the Senior Men's National Team that reached the FIBA EuroBasket 2001 final, which was Turkey's best ever result in the tournament. The TBF's plan for the event focuses on sharing the excitement of the tournament with the entire country. The TBF will work with Turkey's biggest cities outside of Istanbul, including Ankara, Izmir, Gaziantep, Kayseri and Trabzon, to create fan zones and public viewings of games to ensure that FIBA EuroBasket 2017 is a nationwide celebration of basketball. Additionally, building on the previous successes of social responsibility projects, such as the 2010 Children of the World Camp and the 2014 Camp PASS IT ON, the TBF will organize an international basketball camp for children and coaches from FIBA Europe's 52 member countries. "For TBF, hosting international events is about more than the on-court excitement," Erdenay said. "FIBA EuroBasket 2017 represents an opportunity to invest in the future of Turkish and European Basketball, and Camp PASS IT ON Europe is one of the ways we are going to do just that."
RELATED TOPICS