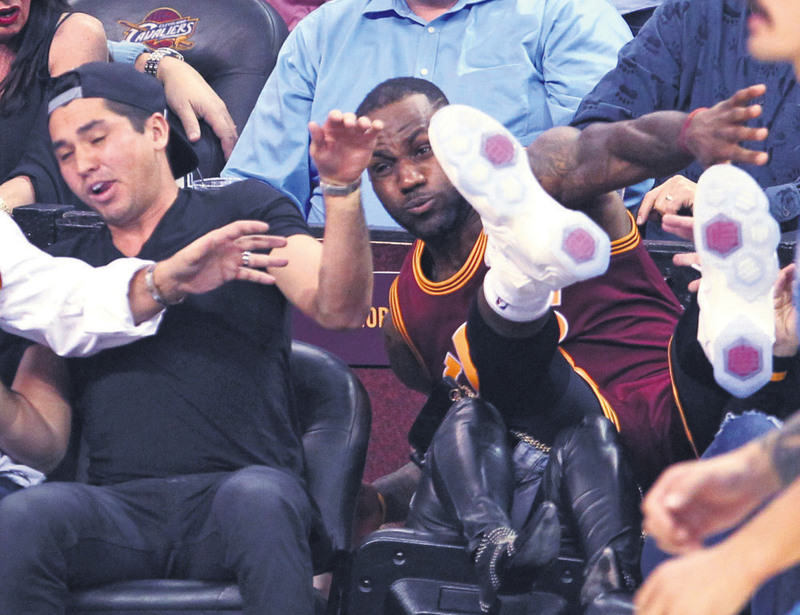 by Associated Press Dec 19, 2015 12:00 am
For years, NBA fans have been willing to pay thousands to sit courtside and watch some of the world's most powerful athletes run and jump. Up close, there is nothing quite like the experience. On Thursday night, that thrill came with a heavy price. Chasing after a loose ball, Cavaliers superstar LeBron James crashed into the wife of PGA golf champion Jason Day, sending her tumbling violently backward from her seat in an incident that could push the league to consider changes to protect its fans.

Ellie Day, who gave birth to her second child last month, was hospitalized from the impact of the scary encounter with James, perhaps the game's most physically imposing player. James was unable to slow himself in time from plowing into Day, who was sitting next to her husband enjoying the Cavs' 104-100 win over the Oklahoma City Thunder. James spoke briefly to Day as she was being immobilized and strapped to a backboard before being carried out of Quicken Loans Arena.

"She squeezed my hand and said she was fine. I think she was just a little weary," said James, who was noticeably shaken by the incident.

Day was expected to spend the night at MetroHealth Medical Center. It's not uncommon for players to dive into the stands in NBA games. On a few occasions there have been minor injuries, but to this point nothing serious. But fans are paying big money for premium seats that are closer than ever, creating the potential for problems.

The league has recently taken steps to improve safety, including cutting the number of photographers allowed to sit along the baselines to reduce the risk of contact with players.

With a full slate of Christmas Day games just a week away, it may be time for the NBA to consider implementing changes to make the game experience safe for fans so close to the floor.

In 2002, a young fan died two days after being hit by a deflected puck at a Columbus Blue Jackets game. Brittanie Cecil was killed two days before her 14th birthday, a tragedy that led to the installation of more protective netting at NHL arenas.

There may be no way to avoid what happened between James and Ellie Day, who has attended many Cleveland games with her Australian husband in the past. James said the incident hasn't changed how he feels about fans being near the floor.

"It's a great experience for our fans," James said. "I mean, that doesn't happen much. It's unfortunate it happened tonight, but that doesn't happen much. Our fans are why our game is so great. Sitting courtside, it's all part of the game. It's pretty cool. If I was a fan, which I am a fan of the game, but, I would love to sit courtside and watch games."
RELATED TOPICS