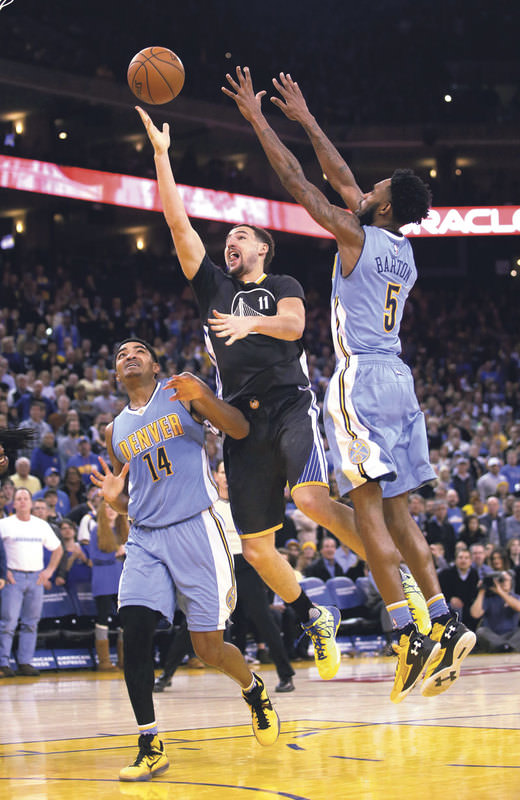 Klay Thompson drove for a go-ahead basket with 15.6 seconds left in overtime Saturday as the Golden State Warriors kept their NBA home winning streak alive with a bruising 111-108 victory over the Denver Nuggets. The Warriors improved to 16-0 at home this season, and posted their 34th straight win at Oracle Arena in Oakland, a streak stretching back to last season. They aren't the only team dominating on their home floor, and the San Antonio Spurs became just the third Western Conference team ever to open a season 20-0 at home with a 121-103 victory over the Houston Rockets.

But the Warriors and Spurs had to battle to keep their streaks alive. In Oakland, a Warriors team missing five injured players were buoyed by the return from injury of Stephen Curry and exploded for a 37-13 first-quarter lead. But the Nuggets outscored them in each of the next three quarters, the Warriors unable to keep them at bay after Curry departed at halftime having aggravated his bruised left shin. Power forward Draymond Green helped fill the void with a triple double of 29 points, 17 rebounds and 14 assists. "We stuck together," Green said of the win. "When stuff started going wrong, nobody fought and nobody complained to each other. We just stuck together."

Spurs forward LaMarcus Aldridge scored 24 points and pulled down nine rebounds and guard Danny Green broke out of a shooting slump with six 3-pointers for San Antonio, who have now won 29 straight games at home dating back to last season. The Spurs broke open a close game that saw eight first-half lead changes with a 26-5 scoring run in the third quarter. Forward Kawhi Leonard added 23 points and played suffocating defense on Houston guard James Harden, holding one of the NBA's leading scorers to one point in the second half. With the win the Spurs improved to 29-6 and avenged their most recent defeat - a Christmas loss in Houston. Veteran forward Tim Duncan returned to action after sitting out three games and posted a dubious career first - failing to score a point for the first time in his 1,598-game regular-season and playoff career.

The Sacramento Kings' 142-119 victory over the struggling Phoenix Suns gave coach George Karl his 1,155th NBA victory, tying him with Phil Jackson for fifth on the NBA's all-time list. LeBron James and the Cleveland Cavaliers dealt Orlando another big defeat, manhandling the Magic 104-79. James scored 29 points, connecting on 11 of 18 shots from the field and four of seven from three-point range. With three assists he passed Nate "Tiny" Archibald for 21st on the NBA's all-time assists list with 6,478.
RELATED TOPICS