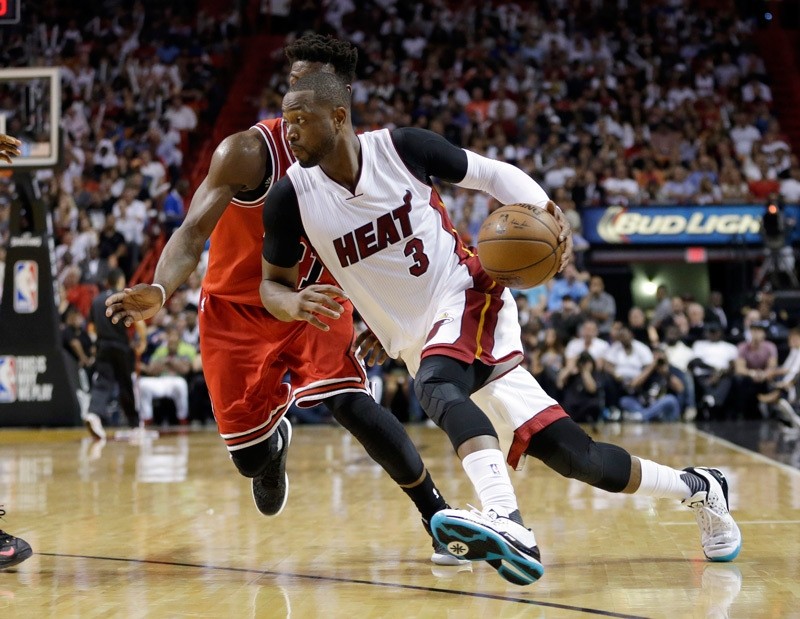 Dwyane Wade danced onto the stage holding TV host Kelly Ripa's hand Thursday morning, settled into his chair and smiled broadly as the studio audience roared with cheers and applause.

Not even a full day after deciding to leave the Miami Heat and join the Chicago Bulls, Wade guest-hosted "Live With Kelly" on Thursday in New York — fulfilling a commitment he made several weeks ago. He spent a few minutes at the start of the opening segment talking about the decision and thanking Heat fans.

"I just want to thank all my fans," Wade said on-air, before an audience that included at least one person who waved his now-former Heat jersey. "We call it Heat Nation. ... This little shy kid from Chicago came from Milwaukee to Miami and really grew up. And we did some special things together."

Wade grew up in Chicago before going to college in Milwaukee. He was drafted by the Heat in 2003.

"OK, so do you remember winter?" Ripa asked. "I'm concerned. We're going to need to get you a coat."

"Can I get one that says 'Live With Kelly?'" Wade replied.

A return to wintry weather notwithstanding, Wade said he "always envisioned" playing basketball in Chicago and that he's excited for the chance.

As would be expected, the rest of the opening segment was somewhat irreverent and if Wade was nervous, it didn't show. Wade and Ripa discussed his appearance in ESPN The Magazine's Body Issue, why NBA shorts are so much longer now than they were a generation ago, how they both have distinctive belly buttons and how players come up with so many unique handshakes with one another.

Wade told The Associated Press he is planning to do something on-camera when his playing career ends, and accepted the chance to guest-host in part because it would provide him with at least a small taste of what television work would be like.