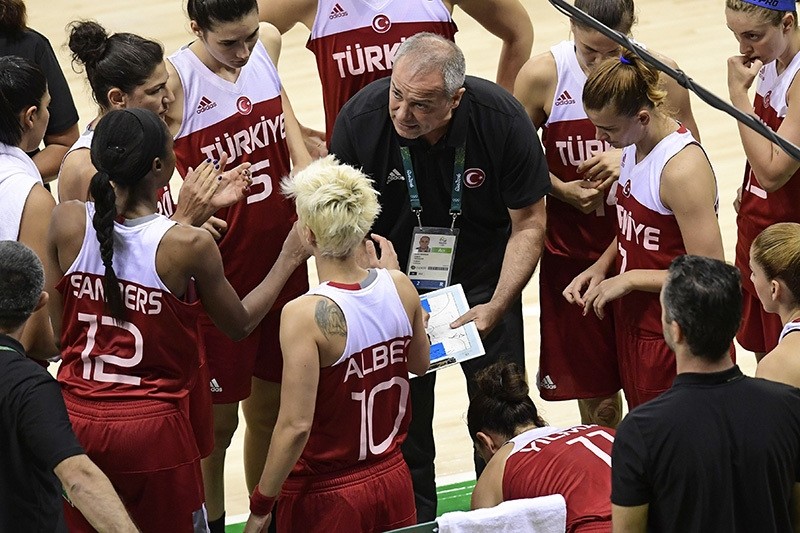 Turkey's head coach Ekrem Memnun (C) speaks to his players during a Women's round Group A basketball match between Australia and Turkey at the Youth Arena in Rio de Janeiro on August 7, 2016 during the Rio 2016 Olympic Games. (AFP Photo)
by Daily Sabah Aug 09, 2016 12:00 am

Problems regarding the organization persisted in Rio Olympics on the third day as Turkish Women's National Basketball Team missed the pre-game training before the game against Australia in Group A when the shuttle driver could not find the way to the arena.

Speaking after the game, which Australia won 61-56, Coach Ekrem Memnun said that the shuttle driver lost the way and it took the team 1.5 hours to reach the Youth Arena from the Olympic village, Turkish daily Hürriyet reported. Memnun added that the game started shortly after they arrived in the arena and the team did not get a chance to warm up for the game.

"Think about an organization that cannot bring you to the game or the Olympic village, because the bus driver doesn't know the roads!" Işıl Alben, a prominent player for the Turkish squad, posted in her Twitter account.

"We have entered our third hour in the side streets of Rio that we have been warned that it is not safe" Alben said, while her last tweet was "Thank God we were able to return to the village after two hours of journey."

During the game, Australia, which had claimed second spot in last Olympics, outlasted Turkey 61-56 despite Turkey's lead in the first half 29-26.

Elizabeth Cambage scored 22 points and grabbed 11 rebounds for the 2-0 Opals. Turkey's Lara Sanders had 25 points in a losing cause.

Brazilian fans cheered on Turkey's behalf especially during the final period of the game.

In its third game of the group, Turkey will play against Japan on Tuesday at 8:45 p.m. GMT.