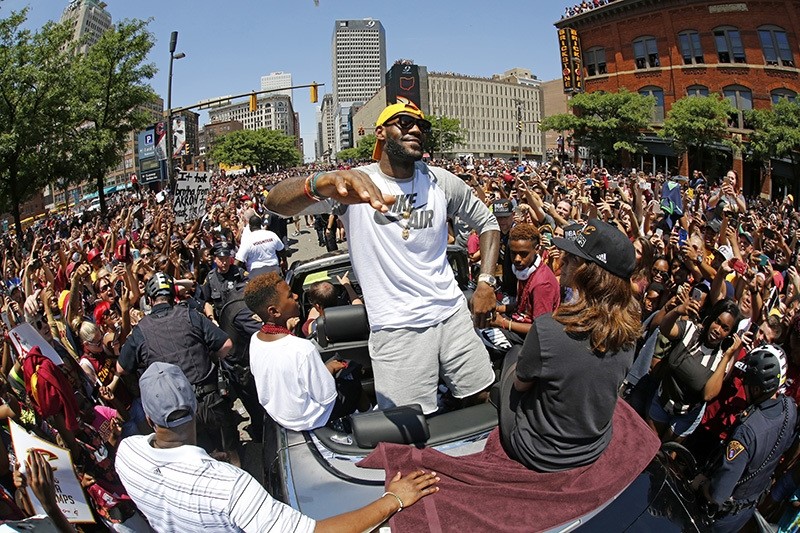 In this June 22, 2016, file photo, Cleveland Cavaliers' LeBron James, center, stands in the back of a Rolls-Royce as it makes it way through the crowd during a parade in downtown Cleveland celebrating the team's NBA championship. (AP Photo)
by Compiled from Wire Services Aug 12, 2016 12:00 am

Fresh from leading the Cavaliers to an NBA title, the first for one of the city's three professional sports teams in 52 years, LeBron James has agreed to a three-year contract with the Cleveland Cavaliers for $100 million, which will likely make him the highest paid player in the National Basketball Association.

James, who said earlier this summer he intended to re-sign with Cleveland, will soon sign the deal, said the person who spoke to the AP on condition of anonymity because certain details of the deal were yet to be finalized.

ESPN.com first reported the financial terms of James' new deal. Accordingly, Cavs have agreed to pay James $100 million and would pay him $31 million in the first year and $33 million in the second, making him the league's highest-paid player for the first time in his career.

The 31-year-old had been expected to accept the same one-year deal he signed in each of his two previous seasons since returning to Cleveland. However, he's decided to stay longer to try to win more championships.

"I'm re-signing back with the Cleveland Cavaliers, man, my hometown team, and I couldn't be more excited with this opportunity once again man, to defend our crown, defend our title," James said in a posting on the athletes' web platform Uninterrupted.

"We all know last year was magical, inspiring, all the words you can come up with man. It was an unbelievable season.

"I just can't wait to get the group back together man, the team, the franchise, and more importantly get everybody together."

The three-time champion also used the opportunity to push the Cavs to re-sign free agent J.R. Smith, a good friend who is also represented by James' agent, Rich Paul.

James wanted to rest and recharge after the finals and skipped playing in the Rio Olympics. He won gold medals in Beijing and London. On Wednesday, Carmelo Anthony surpassed him as the leading scorer in U.S. history.