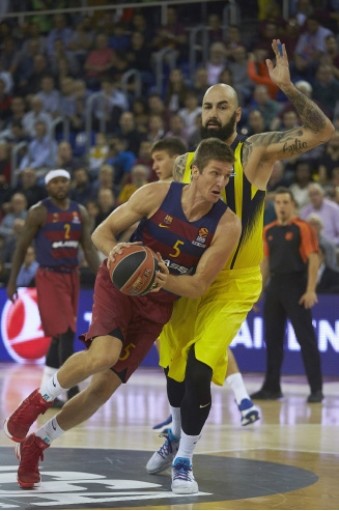 Barcelona Lassa Justin Doellman (L) fights for the ball with Pero Antic (R) of Fenerbahu00e7e during the Euroleague basketball game at Palau Blaugrana stadium in Barcelona, last year.
by Daily Sabah Apr 06, 2017 12:00 am
With most spots in the standings still undecided and the all-important fourth place still up for grabs, the 30th and final round of the Turkish Airlines Euroleague regular season kicks off tonight. Fenerbahçe (17-12) must win against visiting FC Barcelona Lassa (12-17) if they want to retain any chance of claiming home-court advantage in the playoffs.

The injury-hit Turkish giants have been struggling in recent weeks, losing their last three games. Barcelona, on the other hand, are aiming to finish by stringing together a three-game win streak for only the second time this season. They have the fourth-best defense in the competition, allowing just 75 points per game. Meanwhile for Fenerbahçe, rediscovering their strength in offense would be the biggest challenge as they have scored more than 80 points only on one occasion in their last nine games.

Elsewhere in the league, two already eliminated teams will aim to finish this year's campaign on a high note, as Brose Bamberg host Galatasaray Odeabank. The teams are currently tied with 10-19 records, but Bamberg have fond memories from their last meeting, where they bagged a huge 75-90 victory in Istanbul in Round 15.

Bamberg, however, have lost five consecutive home games, and will have to be careful when attacking the rim against a visiting team which has blocked more shots (3.9 per game) than anyone else this season. Panathinaikos Superfoods Athens (18-11), when they travel to play Maccabi FOX (10-19), will keep in mind that a victory will secure them the much sought after fourth place and home-court advantage in the playoffs. Lastly, playoff-bound Baskonia Vitoria-Gasteiz (17-12) can find themselves anywhere between fifth and eighth place coming into tonight. Likewise, they will attempt to finish as high up as possible by closing the regular season with a home win against Zalgiris Kaunas (13-16).
Last Update: Apr 06, 2017 1:56 am
RELATED TOPICS