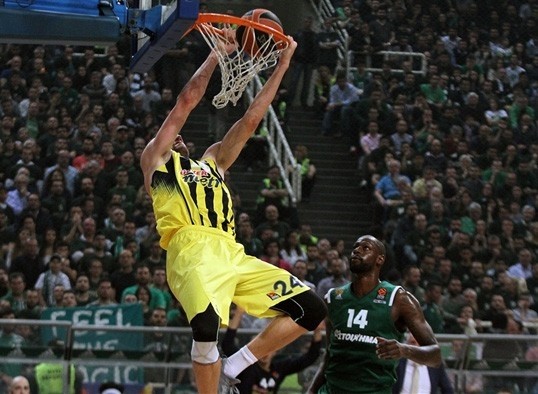 Fenerbahçe toppled Panathinaikos 80-75 on Thursday, to take a commanding 2-0 lead in the best-of-five series of their Turkish Airlines Euroleague Basketball play-off matchup.

The Yellow Canaries' guard Bogdan Bogdanovic was in top form again as he scored 25 points, grabbed eight rebounds and dished out six assists in the crucial away victory at the Nikos Galis Olympic Indoor Hall. The Istanbul club, on Tuesday, became the first Turkish club to beat Panathinaikos in the last 11 years.

Fenerbahçe center Ekpe Udoh was also essential in Thursday's win, scoring 22 points and grabbing eight rebounds, while Bobby Dixon chipped in 14 points. The two teams will square off again on Tuesday, this time in Istanbul as the series shifts to Turkey for the third and the fourth game, if necessary. Meanwhile, in Thursday's other match, CSKA Moscow defeated Spain's Baskonia Vitoria Gasteiz 84-82, to also take a 2-0 lead in the series.