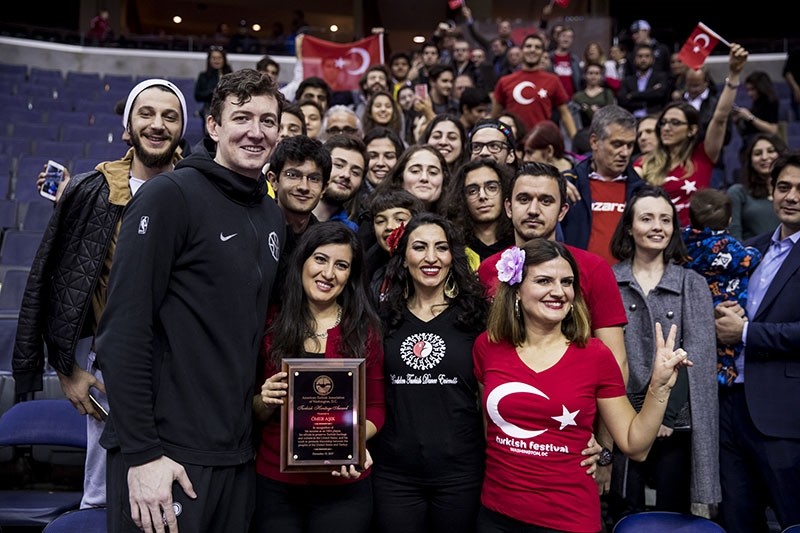 The match between Washington Wizards and New Orleans Pelicans Wednesday turned into "a Turkish heritage night" after droves of Turks crowded the arena to watch Ömer Aşık, who was absent for the last eight months due to Crohn's disease.

With Wednesday's match at Washington D.C.'s Capital One Arena, the Pelicans' Turkish star center returned to the basketball court after a long battle with the disease that caused him to lose 13.6 kilograms (30 pounds) in a short period.

The game attracted a huge Turkish crowd who cheered on the Turkish national team player throughout the entire game.

The halftime show featured a Turkish folk dance performance by the Kardelen Turkish Dances Ensemble. The program, co-organized by the American Turkish Association of Washington DC (ATA-DC), was a big hit with the audience.

After the match, Aşık took photos with the Turkish fans.

"It is a very proud moment for me that so many Turkish fans came here for me. The Turkish folk dance made the night special. Turks in the U.S., we do our best to represent our country," he told Anadolu Agency.

As for the game, the Wizards beat the Pelicans 116-106 while Ömer Aşık had three rebounds and two points in four minutes.

Seven and a half minutes into the game the Wizards were up 27-13. Washington capitalized on four early New Orleans turnovers for 10 points and also had a quick 11-0 fast break advantage.

A deficit of 36-19 following the initial 12 minutes of action ballooned to so much more in the second quarter. But, a well-timed Alvin Gentry technical foul helped New Orleans momentarily get back on track.

After trailing by a game-high 25 points, the Pelicans went on a 22-3 run thanks to 18 free throw attempts in the final 4:40 of the first half.

Although the Pelicans proceeded to tie up the game at 61 apiece just minutes into the third quarter, the Wizards regained their footing to score the next seven following a timeout.

New Orleans was outscored by a 32-15 margin in the third quarter and they failed to mount a serious challenge for the rest of the contest.
Last Update: Dec 20, 2017 4:13 pm
RELATED TOPICS