Fener, Darüşşafaka look to bounce back in EuroLeague Round 5 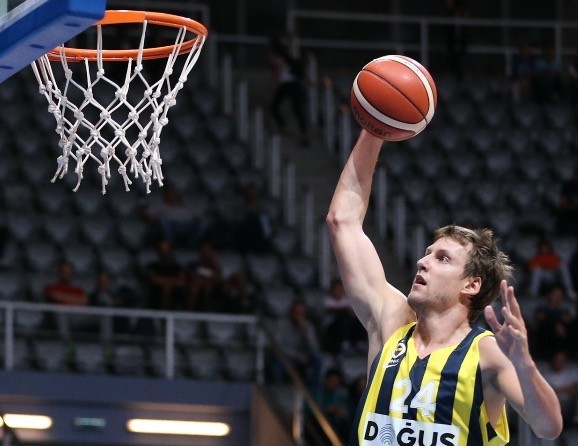 Coming off disappointing losses in Round 4, both Fenerbahçe and Darüşşafaka are looking to bounce back in the Turkish Airlines EuroLeague. Fener will host Bayern Munich while an underachieving Darüşşafaka travels to Spain to face Baskonia Vitoria-Gasteiz

Turkish Airlines EuroLeague Round 5 matches will tipoff today as Fenerbahçe hosts Bayern Munich. The two teams are coming off to this round with different results. Fener lost its first game of the season in Round 4 – in a derby against Anadolu Efes – despite 24 points, 8 boards and 7 assists by Jan Vesely.

On the other hand, Bayern won its second game against Baskonia, thanks to 22 points by Derrick Williams. The host will try to get back on track as soon as possible, especially playing at home, while the visitor will try to get their second straight win to keep going up.

The two big men who are crucial for their teams will be facing off in a battle in the paint that promises to be thrilling.

For Bayern, Devin Booker might have had a slower start to the season than expected, but he presents strong numbers of 8.0 points, 3.3 rebounds, 2.3 assists and 1.0 steals in his debut season in the EuroLeague. The two explosive big men will be the protagonists of one of the most intense duels on the court.

Fenerbahçe features the third best offense in the league (88.7 points) and the fourth best defense (80.2 points against). The loss to Efes only developed in the final minutes, so Coach Obradovic's team is still on the right track.

In the rebounding category, Fenerbahçe should try to crash the boards more aggressively as it currently sits in the third-lowest position in the league. Lucky for the hosts, Bayern is second lowest, so there's some respite there also. In any case, should Fenerbahçe display its usual performance, the hosts will have solid chances of winning.

Also today another Turkish team Darüşşafaka head to the Spanish countryside to face off against Baskonia Vitoria-Gasteiz.

The two teams stand at 1-3 and at the bottom of the standings. Baskonia is comimg off a painful road loss at FC Bayern Munich despite Vincent Poirier's 24 points and 11 rebounds. Darüşşafaka also lost at home against Barcelona in spite of Micheal Eric's 17 points and 9 rebounds.

Both teams are in danger of falling into a deeper hole, so at this point of the season, the winner of this game will get a confidence boost.

The paint in this duel will be as crowded as ever, but when the spotlight turns to Eric and Poirier, it will shine a bit brighter. Eric has started the season averaging 12.5 points, 8.0 rebounds and 17 performance index rating (PIR), and is one of the two main pillars for Dacka so far.

On the other side, Poirier has also started strong with his 12.5 points, 6.5 boards, 1.5 assists, 1.5 steals and 16 PIR. It will be as balanced as they come, but the clash between these two big men will surely have a major impact on the final outcome of the game. This will only be the second time that these two teams meet in official competition. In the 2016-17 season, each won its own home game and they stand at 1-1 so far. In one of those games, Darüşşafaka set its PIR club record with 109 and also drained 14 threes.

In the two other matches in the EuroLeague Round 5 today, a marquee duel will be taking place in Moscow when undefeated CSKA welcomes Olympiacos. Also, Barcelona will look to keep the momentum going after back-to-back wins when it hosts Maccabi.