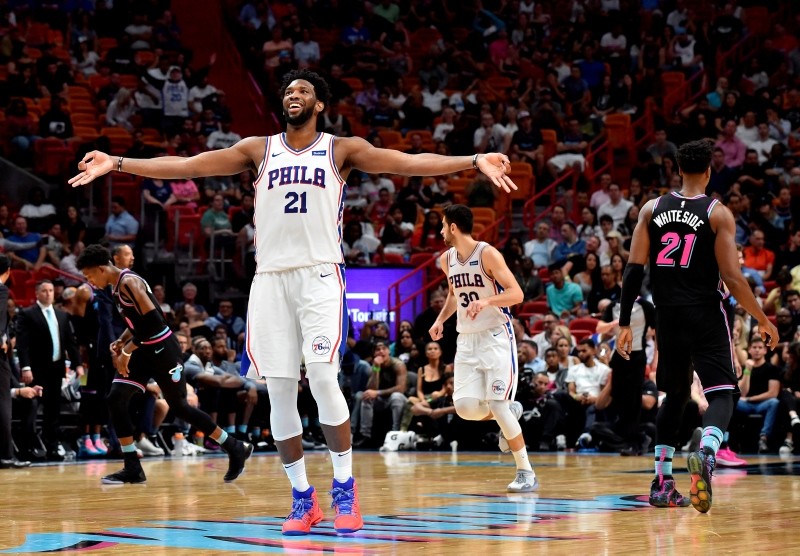 Philadelphia 76ers center Joel Embiid (21) reacts after making a 3-point basket over Miami Heat's Hassan Whiteside (21) during the 2nd half at American Airlines Arena. Furkan Korkmaz (30) is in the background. (Steve Mitchell-USA TODAYSports/Reuters)
by Compiled from Wire Services Nov 13, 2018 12:00 am

Korkmaz also aided the 76ers in clinching their ninth win this season with four rebounds and one steal in his 22 minutes on the court.

21-year-old Korkmaz joined the 76ers last year in his first foray into NBA. A member of Turkish national basketball team, Korkmaz started out in Turkey's Anadolu Efes before shining on the national team with an average of 25.3 points per match that made him the top scorer in an international tournament in 2013.

However, there was no doubt that 76ers' Joel Embiid was the MVP of the game with a double-double as he scored 35 points and grabbed 18 rebounds. JJ Redick added 25 points.

"It's hard to win on the road in this league, especially when you don't have your full team," Redick said. Having Embiid helped.

It was the second time in a four-day span that Embiid went for at least 35 and 18; he had 42 points and 18 rebounds on Friday against Charlotte. Embiid was also 16 for 20 from the foul line — marking the ninth time that a player took at least 20 free throws against Miami and the first since LeBron James did it on Feb. 4, 2010.

"The way he has been dominating, it truly doesn't surprise me," 76ers coach Brett Brown said. "I will admit, when I come back and I see the stat sheet, I'm shocked at how dominating at times he is."

Ben Simmons and Mike Muscala each had 13 for Philadelphia.

The win came hours after the 76ers finalized a trade with Minnesota to land Butler, the four-time All-Star who was in Philadelphia and not with the club in Miami.

Butler will be introduced at the 76ers' facility in Camden, New Jersey, on Tuesday, before he flies to Orlando and makes his debut with Philly on Wednesday night against the Magic.

Goran Dragic scored 22 points for Miami, which got 17 from Josh Richardson and 14 from Wayne Ellington. The Heat have dropped three straight, all of them at home.

Miami was called for 30 fouls — five each on centers Hassan Whiteside and Kelly Olynyk, who were both limited to 22 minutes. The Heat also had 12 turnovers in the second half.

"Some costly ones, momentum-changing ones," Heat coach Erik Spoelstra said.

It was the first meeting between the clubs since last season's playoffs, when Philadelphia ousted Miami in five games in the first round. And while Philadelphia led most of the way in this one, the 76ers never really pulled away until the final moments.

Their first double-digit lead of the night came on Embiid's step-back 3-pointer with 1:59 remaining. Simmons got loose for a dunk on the next Philadelphia possession, and that was the signal for most Miami fans to start heading to the exits.

Here are other results from last night: