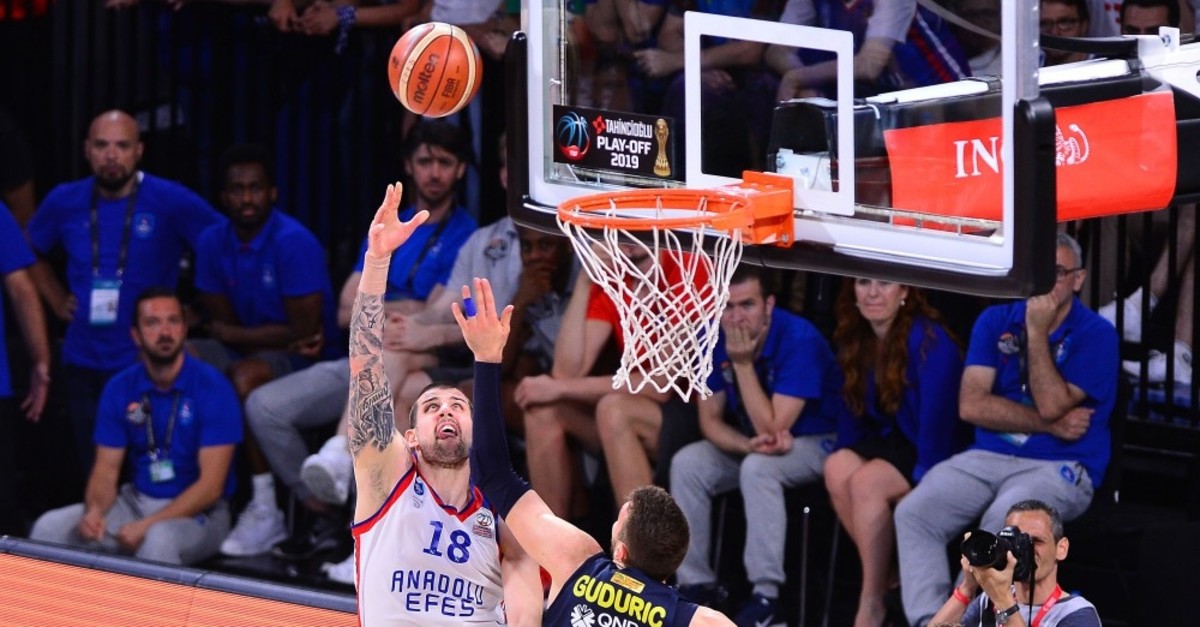 Anadolu Efes edges closer to another Basketball Süper Lig title with its 3-2 lead against Fenerbahçe Beko. Despite the rising tensions in the eventful finals series, Efes can secure the championship if it can keep up its winning streak

Controversy over a temporary memory loss for Fenerbahçe Beko's Luigi Datome and ever-increasing swearing of Fenerbahçe fans against Anadolu Efes overshadowed the latest match between the two giants of the Basketball Süper Lig. Still, Anadolu Efes took the lead in the playoff final series with a 3-2 win in Game 5 with a score of 86-76 against defending champion Fenerbahçe. Today's away game against Fenerbahçe may put an end to the latter's ambition for a fourth consecutive title and otherwise, it will extend to a decisive Game 7.

The first quarter of Game 5 in Istanbul on Monday night went in favor of Anadolu Efes at 27-20. Fenerbahçe only came closer to Anadolu Efes in points before the break, at 39-37. Adrien Moerman was the player of the game as Anadolu Efes' French international tallied 26 points and eight defensive rebounds in forty minutes he played. He was followed by Bryant Dunston, who scored 19 points and seven rebounds. Man of the match for Fenerbahçe was Kostas Sloukas. The prolific Greek shooting guard was behind Fenerbahçe's 22 points. Anadolu Efes largely relied on starting five of Dunston, Simon, Moerman, Micic and Larkin while four bench players scored only five points.

The bitter rivalry between the two powerhouses of Turkish basketball does not translate into violence as often is the case in Turkish football but the two sides do not shy away from harsh rhetoric against each other. Anadolu Efes coach Ergin Ataman has been outspoken in his criticism of Fenerbahçe as the rival team's fans often target him as they hurl insults in games against Anadolu Efes. Monday's game was no different and warnings against swearwords chanted by fans came up three times from loudspeakers during the match. Organizers threatened to evacuate fans before the chants died down following the third warning.

Another talking point of the match was what happened to Fenerbahçe's Italian power forward Luigi Datome after a blow to the head rendered him unconscious and he suffered from temporary memory loss. Media outlets had reported that paramedics manning an ambulance in the Sinan Erdem sports hall where the game was played did not admit him to the ambulance and the club had to take Datome to hospital with their own vehicle. Datome recovered and was in good health yesterday. Anadolu Efes said in a written statement yesterday that Fenerbahçe did not request an ambulance for Datome and decided to take Datome to the hospital on their own. The club said the ambulance deployed for the match was banned from leaving the sports hall except for emergencies, under the regulations of the Turkish Basketball Federation though they value the well-being of players above all, no matter which team they play for. The Turkish Basketball Federation, meanwhile, said in a statement that it was the duty of clubs hosting the match to deploy paramedics and ambulances for all matches and they had the responsibility to address health problems arousing in matches.

Anadolu Efes ruled the local league this season while Fenerbahçe dominated the Euro league. The team will be crowned with the top title for the 14th time if it defeats Fenerbahçe in the final series. Under its former name Efes Pilsen, the team won its first title in the 1978-1979 season and it was the undefeated champion for most of the 1990s. The team also boasts consecutive titles in seasons between 2001 and 2005. It won the top title for the last time in the 2008-2009 season.

Fenerbahçe, on the other hand, holds three consecutive titles in the Basketball Süper Lig. It owes much to the famed coach Zeljko Obradovic who turned the team into a serious rival for Anadolu Efes and helped its rise in the Euro league.