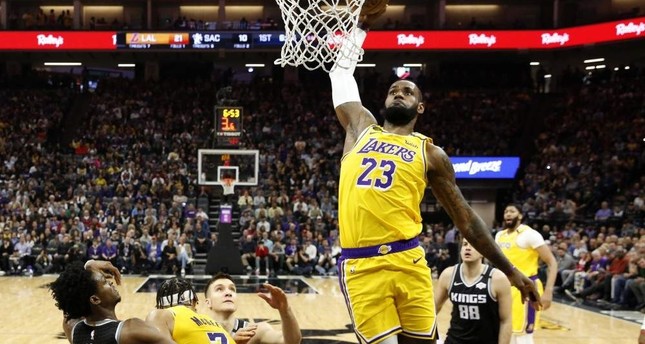 Anthony Davis scored a team-high 21 points as the Los Angeles Lakers put the emotions of their Kobe Bryant tribute night behind them with a 129-113 victory over the Sacramento Kings on Saturday.

The Lakers won their first game since Bryant died in a horrific helicopter crash after losing 127-119 Friday to Portland on a night when they paid tribute to the former NBA legend.

Davis followed up his 37-point performance against the Trail Blazers with another team-high total in the second game of a back-to-back set. "We got our first win," said Lakers coach Frank Vogel. "It is never going to feel normal. It is never going to feel the same. "That is our first win since this happened. There are going to be a lot of important steps for us along the way."

LeBron James had a triple-double of 15 points, 10 rebounds and 10 assists and Avery Bradley scored 16 of his 19 points in the first 12 minutes as the Lakers racked up 81 points in the first half. Bryant's career-high was 81 points in 2006 against Toronto second only to Wilt Chamberlain's 100-point game in 1962." "I loved the way we came out tonight," Vogel said. "We knew last night was going to be an emotional game. We got through it. Tonight it was get back on track and go out and get a win no matter what."

James' triple-double was his 11th of the season, one off Luka Doncic's league lead and the 92nd of his career. Only Oscar Robertson (181), Russell Westbrook (146), Magic Johnson (138) and Jason Kidd (107) have more career triple-doubles. James said they had to get used to Bryant tributes whenever they travel to a new NBA building, noting: "It should be acknowledged because of what he meant to this franchise for 20 years." One of the last people to talk to Bryant before he and eight others died last Sunday, James said it was a bittersweet recollection. "It is not a great memory because it is the last one (conversation)," he said after Saturday's game. "I got an opportunity to talk to him. But for me to always think about that is not a great memory, because it was the last one."

Elsewhere, red-hot Damian Lillard continued blistering pace with 51 points to lead the Portland to a 124-107 victory over the Utah Jazz. Lillard connected on 17 of 29 field-goal attempts and made all eight of his free throws en route to his third 50-point performance over the past six games and fourth of the season. He is averaging 48.8 points during the six-game stretch. In Boston, Jaylen Brown scored 32 points as the Boston Celtics won their sixth game in the last seven with a 116-95 victory over the Philadelphia 76ers.

Jayson Tatum tallied 25 points, Marcus Smart had 16 points, and Brad Wanamaker chipped in 15 as the Celtics avoided a season sweep by Philadelphia. Boston played without injured leading scorer Kemba Walker, who has a sore left knee. Ben Simmons led the 76ers with 23 points, and Joel Embiid was held to 11 on a dismal one-of-11 shooting. Philadelphia was done in by poor shooting. They attempted 33 shots from three-point range but made just seven.

The 76ers had beaten the Celtics in their first three meetings this season, including December 12 at the Boston Garden. Also, Kawhi Leonard scored at least 30 points for the ninth straight contest as the Los Angeles Clippers beat the Minnesota Timberwolves 118-106. Leonard, who also had six rebounds, needed just 24 minutes of playing time to score 31 points. Paul George, playing in his second contest after missing nine games because of a left hamstring strain, had 21 points and seven rebounds in 25 minutes.

In Washington, Brooklyn Nets guard Kyrie Irving sprained his right knee in the fourth quarter of Saturday's 113-107 loss to the Washington Wizards. Irving – who will have an MRI on Sunday to determine the extent of the damage – became tangled with Bradley Beal in a tussle for the ball before Beal fell awkwardly on the outside of his right leg. Irving finished with 11 points, his lowest mark in a game this season, as the Wizards rallied for the win.