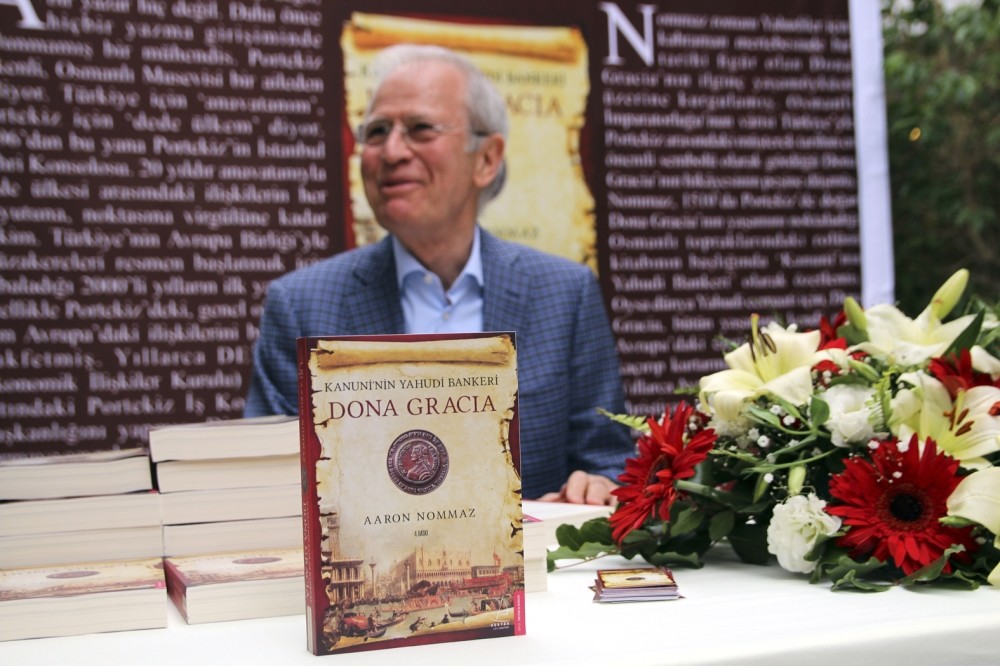 Written in Turkish and translated into English, u201cKanuniu2019nin Yahudi Bankeri Dona Graciau201d (Dona Gracia, the Jewish Banker of Suleiman the Magnificent), written by Aaron Nommaz, tells the story of Dona Gracia, who at the time was the richest woman.
by Anadolu Agency Apr 11, 2017 12:00 am

Aaron Nommaz, Portugal's honorary consul in Istanbul, hasn't forgotten the kindness shown by the Ottoman Empire to his ancestors 500 years ago. In fact, he has chosen to immortalize the favor through his books.

In his first book, "Kanuni'nin Yahudi Bankeri Dona Gracia" (Dona Gracia, the Jewish Banker of Suleiman the Magnificent), Nommaz tells the story of Dona Gracia, who at the time was the richest woman in the world.

After the publication of his first book, Aaron Nommaz has now finished a second book, which tells the story of Josef Nazi, a close friend of Selim II, a man who left his mark in the Ottoman Empire's history.

Speaking to reporters, Nommaz said he feels at home in Turkey. Written with the aim of highlighting the humanitarian aspects of the Ottoman civilization, Nommaz said he completed his first book "Dona Garcia" in five years.

"I am one of the founders of the 500 Years Foundation. Our foundation aims to show the world that Turks have always fulfilled their humanitarian duties throughout the history. They embraced Jews, who fled to Turkish soil in order to protect their freedom of faith and thought. We aim to announce the humanitarian approach of Turkish people in Turkey and abroad in a comprehensive way, and to help Jews express their gratitude. We are presenting different events and works that reveal the kindness of the Ottoman Empire and its hospitality to refugees. I am Turkish, and the Ottoman Empire is my homeland. Portugal is my ancestors' soil. I am Jewish. My ancestors date back to the 15th and 16th centuries. Dona Gracia comes from the same group. I am of Portuguese origin, so is Dona Gracia," he said.

Nommaz said the Ottoman Empire was the only place that would accept Jews when they faced persecution in different parts of the world.

"We were persecuted everywhere, including in America and Northern Europe. When the situation was bad for Jews, the Ottoman Empire embraced us. We will never forget this favor. It is not only about me. It is about two million Ottoman Jews who will never forget. I aim to educate as many people as possible about this favor, and my first book was part of this purpose. Dona Gracia suffered a lot in Europe. Then she came to Ottoman soil where she discovered a completely different world. She found freedom. She found the freedom to freely live her life," Nommaz said.

After his first book attracted attention, Nommaz finished his second book about Jozef Nasi. Josef Nazi was a very important figure, who left his mark in the Ottoman Empire. He was the Duke of Naxos and a close friend of Selim II.

"We are planning to publish this second book in a couple of months. I have plans to write a history book after that," he said.