With No Policy Incentives, Turkey's Solar Entrepreneurs Wait Out in the Cold 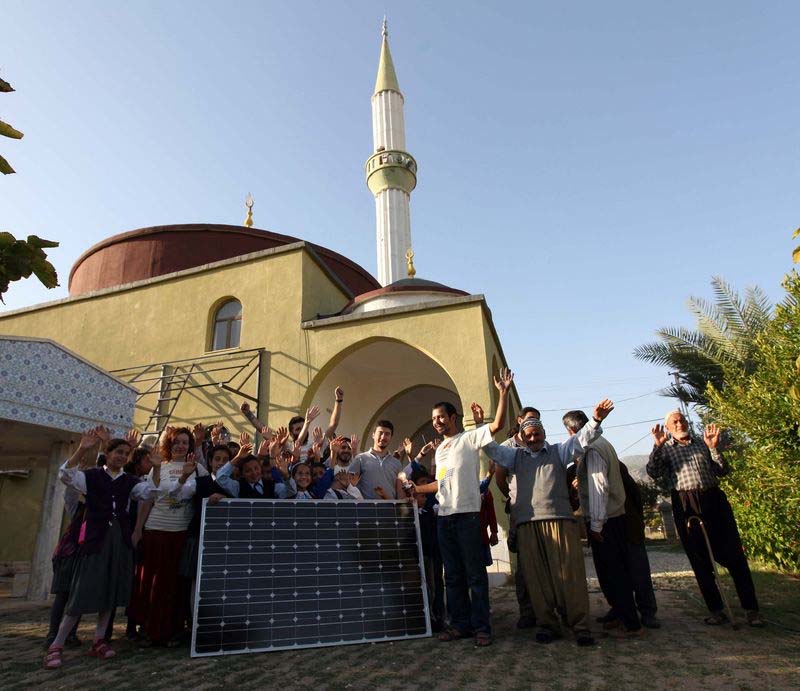 On Nov. 14, after working for ten days to convert their mosque to run on solar power, residents of a village in the Turkish district of Akkuyu assembled outside the building and unfurled a banner that read, "The sun is rising on Akkuyu."

It was a bright moment in what has been an otherwise discouraging year for Büyükeceli, a picturesque Mediterranean village in Akkuyu. In July, the Turkish government authorized Russia to build Turkey's first nuclear power plant in Büyükeceli. Averse to the risks posed by the plant, Büyükeceli locals asked the government to let them build a photovoltaic panel array instead.

When the government rejected that proposal, the people took matters into their own hands and installed a 2.25 kilowatt-capacity system on their mosque — enough to meet all of its energy needs, and then some.

But their triumph is dimmed by the fact that, although the excess power produced by the mosque can be channeled back into the grid, the villagers won't get a cent for it; the country's energy authority doesn't offer any incentives to solar power producers. Furthermore, the nuclear plant plans seem to be progressing as usual.

The Büyükeceli villagers' effort to go solar illustrates the general plight of solar power producers in Turkey: the regulatory vacuum in which they operate, and the institutional bias toward conventional energy manufacturers. But equally striking is their determination, despite these obstacles, to harness their country's solar resources.

"Turkish people really like the idea of producing their own electricity," says Korol Diker, a climate and energy campaigner for the Mediterranean branch of Greenpeace, which helped the Büyükeceli villagers install their solar panels.

"We mostly use solar to heat water, but to use it widely for electricity, people need to have more incentives, and need to be able to sell it to the state. Turkey has never invested in this field, and solar has to fight the big players like coal and gas, so the government must open a space for it." Instead, according to Diker, the government has a history of subsidizing nuclear, coal, oil and natural gas projects.

According to many environmentalists, market analysts and solar developers, the solar industry in Turkey could become one of the biggest in the world if its government offered solar producers as much regulatory and financial support as the governments of Germany and Spain, which offer solar producers generous feed-in tariffs.

"When it does take off in Turkey, it will take off really quickly, because everyone's waiting for them," says Louis Hennequin, a project developer from the U.S. solar and wind project development firm Lincoln Renewable Energy, who attended a renewable energy congress in Istanbul this fall to scout out promising solar projects in Turkey.

"Given the potential in Turkey, of course, companies would rather step in today. But in five years, if other markets slow down, other incentives go away, and Turkey's market grows, it's still going to be interesting," according to Hennequin.

Sofian Irsheid, who attended the same conference on behalf of the German development firm Donauer Solar Systems, is more discouraged by the situation: "There's a bottleneck. There is lots of knowledge, lots of willingness, and there are many companies doing groundwork. But it's very clear they need a feed-in tariff to make this attractive in Turkey."

Indeed, for the past two years, a law that would give financial incentives to clean energy producers has been sitting before Turkish parliament, waiting for the assembly to vote on it. The parliament seems unlikely to pass the amendment any time soon, however. And even if it does pass, it will only offer solar energy producers a maximum feed-in tariff of 10 euro cents per kwH: far less than a 24 euro cent feed-in tariff, which, according to Diker, is necessary to launch a strong solar market in Turkey.

"My best guess is that nothing satisfactory will pass," says Osman Coskunoğlu, a member of the Turkish parliament for the Republican People's Party, the current opposition party. "Ostensibly, they don't want to take on the economic burden of higher and better incentives. However, my best guess is that it's because of the natural gas and oil lobbies."

As Coskunoğlu points out, several prominent figures in Turkish government have vested interests in the oil and gas industries. The most striking example is the Turkish prime minister himself, whose son-in-law, Berat Albayrak, is CEO of the company building a petroleum pipeline from the Black Sea to the Mediterranean.

More Sun than Spain or California

There is no single reliable measure of Turkey's solar potential. The government's general directorate of electrical power resources estimates that Turkey receives, on average, 1.02 million terawatt-hours of solar radiation each year. The European Commission's Joint Research Centre gives a slightly higher figure, 1.21 million twH. For comparison, Spain and California each receive about 800,000 twH per year.

At that rate, photovoltaic cells with a standard energy conversion efficiency rate of fifteen percent would have to cover just 2,000 square kilometers — one-half of one percent of Turkey's landmass — to yield a theoretical installed capacity of 40,000 MW, Turkey's currently installed electrical capacity. (Because of energy storage and transportation limitations, this is only an ideal figure for now.)

But photovoltaic systems account for only a single megawatt of the Turkey's 40,000 MW installed electric capacity. At eight gigawatts of thermal equivalent (GWth), Turkey has the third highest solar thermal installed capacity in the world, according to the International Energy Association. Even so, solar thermal accounts for less than one percent of Turkey's overall energy production.

View from the solar thermal industry

Solar heating tanks are a common sight on the roofs of Turkish houses, even throughout the country's less populous eastern and central regions. Keeping track of all these installed solar thermal systems is very difficult, however, because of the unofficial, decentralized nature of the industry.

"Solar thermal manufacturers in Turkey are not very well organized," says Halil Ibrahim Dağ, managing director of Solimpeks Energy Corporation, a solar thermal and hybrid collector manufacturing company. There is one coalition of companies in the solar power business, according to Dağ, but it has no clout with the Turkish government.

Of the several hundred solar thermal manufacturing companies in the country, he says, "there are only about ten companies which are financially strong. The rest are small places, three or four people in a tiny office." The smaller outfits buy their raw materials under the counter so they don't incur any value added tax, making their products about one-fifth cheaper than the merchandise of more official companies.

As a result of these low-budget, unregulated manufacturers, many solar thermal systems in Turkey do not work as efficiently as they should, according to Dağ. But companies like Solimpeks still find it difficult to compete with them because their prices are so low.

"In European countries and the U.S., the governments give incentives so people can easily afford solar thermal systems. If private residences in Turkey were given an incentive by the government, like only having to pay half the installation costs, then some standards could be applied to the market. Otherwise, it doesn't work well," Dağ explains.

So Solimpeks has gone after more accessible markets, becoming Turkey's biggest exporter of solar thermal systems. And within Turkey, it mainly sells to clients who need energy for a newly constructed industrial or commercial facility, because at that level of energy use, Dağ says, it can take just three or four years for a solar thermal system to pay back its installation costs, as opposed to the five-year payback time of natural gas. With those clients, no government incentive is needed — which is a good thing, according to Dağ, because "in the short term, it doesn't look like the government is going to make good incentives for solar."

View from the photovoltaic industry

Ateş Uğurel has accepted his government's reluctance to bet on solar energy, and made photovoltaic cells profitable in Turkey in spite of it.

"Some solar companies are one hundred percent dependent on the government's decisions," he says. "We are one hundred percent independent." By "we", Uğurel means Clean Globe, a solar energy consulting and project development firm he founded fifteen years ago. The company works on social projects, such as EcoSchools and SolarParks, in addition to installing photovoltaic panel arrays on commercial buildings.

"We've been successful because we've persuaded companies to use photovoltaics because they are economically wise, not just socially responsible," says Uğurel. "In countries like Turkey, you can't rely on the government for help — they change overnight."

Indeed, far from waiting for an incentive from the government, Clean Globe has been devising routes around existing regulations that restrict the installation of private power systems.

Clean Globe wouldn't be able to offer solar-generated electricity at such attractive prices, according to Uğurel, were it not for the company's partnerships with foreign financing institutions and solar development companies outside of Turkey. He won't disclose the identities of these partners, but he knows their loans are crucial to Clean Globe's success. In general, he says, "if credit becomes more liquid in Turkey, nothing can stop it."

But environmentalists at large, like Greenpeace campaigner Diker, are worried that the government's inaction will permanently stunt Turkey's solar industry.

"Eventually the market prices for solar will go really low, and even the government will have to move that way. The problem is, if we don't start investing now, we won't have our own industry, and we won't be installing the necessary infrastructure to allow renewables to grow, so we'll actually lose several years," he warns.