If the offer is for real, we have the money 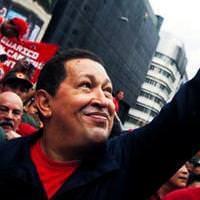 Owners of the world’s second largest petrol reserves, Venezuela has made an offer to Turkey for a property trade in exchange for oil. Venezuela’s proposal could be a solution for Turkey’s current account deficit problem and the high cost of oil.

If Chavez's offer comes through, Turkey could be paying prices of 40 dollars per oil barrel, to which they currently pay out 100 dollars. The option is promising for the government, which will be sending a second Turkish delegation to Caracas of February 10th to discuss the offer.

It all started when Minister of Energy and Natural Resources Taner Yıldız met with Venezuela to discuss providing real estate projects in exchange for petrol. Proven to have the second largest petroleum capacity at 172.3 billion barrels, the potential Venezuela offers could solve Turkey's current account deficit and oil prices problems. Under Turkey's Housing and Development Administration's leadership, experienced Turkish companies would rebuild Venezuelan cities which have fast become reminiscent of shanty towns.

In short, it appears that if the deliberations result in a positive outcome, and an agreement is reached, both nations may soon be benefitting to the likes of billions of dollars from the trade.