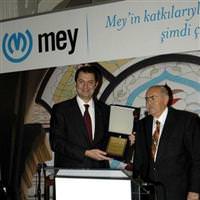 Turkish spirits maker Mey Icki, which drew interest from Diageo late last year, said it had applied for a 25 percent listing on the Istanbul Stock Exchange ahead of a possible initial public offering.

Last December sources familiar with the matter said Diageo was in preliminary talks to buy Mey, with one source saying it could pay up to $2.5 billion. Mey declined to comment on the status of any talks with Diageo on Wednesday.

"Mey has filed an application with the ISE as part of the normal regulatory process in connection with a possible IPO. Further updates will be provided to the market as and when appropriate," the firm said in a statement.

According to a filing with the exchange a green shoe option would allow Mey Icki a possible listing of up to 28.75 percent.

TPG Capital, which acquired Mey in 2006 for about $800 million, mandated JPMorgan, Goldman Sachs, Credit Suisse and Bank of America Merrill Lynch to run the IPO.

"This application is a technical requirement of the Turkish stock exchange to keep the option of an IPO open, but it does not preclude an eventual 100 percent trade sale," a person close to the situation said.

Emerging markets like Turkey are expected to be a key driver of equity capital markets activity this year as investors seek higher yields. Turkey is likely to feature prominently alongside countries such as Poland and Russia.

But Turkey's IPO market largely disappointed in 2010 as sale prices failed to match firms' high expectations -- prompting some companies to defer or scale down offerings.

Bankers have said they expected prices to be set more realistically in 2011, amid a wave of new issuance.

"I think if the price takes into account regulation risks it could receive good interest from investors," he said.