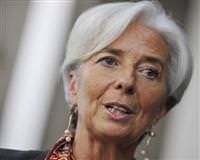 French Finance Minister Christine Lagarde appeared poised to become the head of the International Monetary Fund this week despite a strong challenge to Europe's traditional hold on the job.

An informal survey by Reuters of voting countries indicated Lagarde would easily get the majority consensus needed over Mexico's central bank governor Agustin Carstens to become the next managing director of the global lender.

Carstens picked up endorsements from Canada and Australia late on Friday in a significant challenge to Europe's grip on the IMF top post, but it is unlikely to change the outcome.

The IMF's 24-strong board of member countries will hold a straw poll on Monday to determine whether either candidate has a clear majority.

The race has been one of the most hotly contested in IMF history as developing countries have aggressively pursued a process that would be based on the best qualified candidate and not based on nationality, despite Europe's large voting bloc.

The determining voice over the next two days will be the United States, which so far has been silent on who it supports. However, the Obama administration is widely expected to back Lagarde, 55, to preserve the long-standing convention with Europe that Americans will be the IMF's No. 2 official and the president of the World Bank.

Japan and China, which rank second and third behind the United States in voting influence, have also refrained from publicly supporting any candidate. However, IMF board officials said both countries are likely to vote for Lagarde.

The IMF job fell vacant after the sudden resignation of Dominique Strauss-Kahn, who has been charged with sexually assaulting a hotel maid in New York. He denies the charges.

Although a self-proclaimed long-shot candidate, Carstens has vigorously campaigned on his experience as a former IMF official, as well as dealing with developing world economic crises.

He has the backing of all of Latin America, with Peru and Chile endorsing him on Friday. While Brazil has been silent on whether it supports him or not, IMF board officials expect it to join the rest of the region.

Supporters of Lagarde cite her political and economic credentials throughout Europe, which is the focal point of IMF efforts to head off another global economic downturn.

Both candidates have committed to more voting power for emerging economies and even-handed advice to both advanced and developing countries.

Developing nations want their growing clout in the global economy reflected at the IMF, but have won only modest increases in voting power so far.

Before his downfall in May, Strauss-Kahn oversaw a shift in voting power that gave emerging markets greater say but not as much as they wanted. He named a Chinese special advisor, a step short of giving Beijing a coveted deputy managing director post.