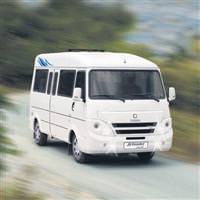 The agreement comes after Hyundai signed a $557 million joint venture deal with Chinese commercial vehicle maker Sichuan Nanjun Automobile Group in April as part of a move to raise its commercial vehicle sales in China to 160,000 units by 2015, more than double the 2011 target of 73,000 units.

Hyundai, the world's No.5 auto group along with its affiliate Kia Motors , said in a statement it expected its recent deals to lift its commercial vehicle sales to 300,000 units in 2015, up from an estimated 82,000 units for 2011.