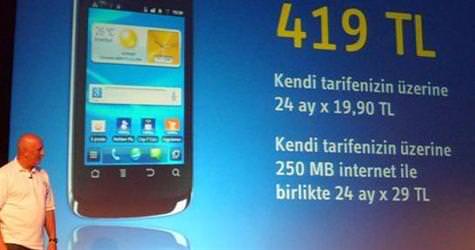 Turkcell's new smart telephone, the T20 is now for sale at 419 TL. The T20 can be used with either a smart card or mobile wallet technology. Turkcell General Manager Ciliv states, "We are expecting sales in the 100,000’s.”

Turkcell has released the T20, their newest smart telephone on the market. The five megapixel camera. Which sells for 419 TL, has a touch screen and the mobile wallet application.
Pointing out that the highest selling Android telephone is T10, Turkcell General Manager Süreyya Ciliv, states, "Over 100,000 T10 phones were sold in six months. After the iPhone, it has become the highest data using appliance. We raised our objectives with the T20. Therefore, we have determined the competitive sales price of 419 TL.
OVER 100,000 SALES
Explaining that the 419TL price tag for a telephone, which has an extensive amount of options, is a significant advantage, Ciliv states, "We believed in this telephone's added value. We are hoping that the support we have offered via this price will result in over 100,000 in sales. We want to thank the Turkish engineers who participated in making this product."
Assistant General Manager, Cenk Bayrakdar state, 'The phone has a 3.5 inch screen, a sensitive touch screen, and operates with 600 MHz . You can use the GPS system for determining positioning. You can leave youru credit cards at home with the NFC module's mobile wallet system. In addition the phone has a 390 hours waiting and 390 minute talking capacity."
Available for 29 TL a month
The T20, available in black and white, will be available to buyers for 29TL a month, including a 250 MB internet package for 24 months.
EACH SCREEN IS LIKE A NEW APPLIANCE
Remote Access: When the telephone is lost or stolen, the user can lock the phone, set off an alarm or erase all date.
Mobile Wallet: It will be possible to connect a number of credit cards to the phone, thereby eliminating the necessity for cash money.
Mobile TV: Allows for television-viewing from the cellular phone.
Long Distance Remote: It will be possible to watch the visuals on the cell phone through a television.
Video and Photograph: Video footage and imagery increased with five megapixel quality.
Security Card: It will now be possible to use the NFC card, located under the lid of the T20 to passing through security check points.