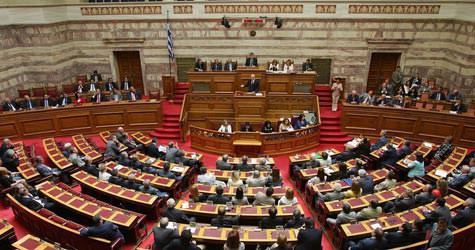 Greece's prime minister won the backing of his cabinet on Wednesday to hold a referendum on a 130 billion euro bailout package but will find the stunned euro zone leaders who struck the deal last week harder to convince.

Some of his party lawmakers called for him to quit for jeopardizing Greek euro membership with his shock decision to call a popular vote, a move that pummeled the euro and global stocks, but the cabinet support at least gives him a stay of execution before a confidence vote in parliament on Friday.

"The referendum will be a clear mandate and a clear message in and outside Greece on our European course and participation in the euro," George Papandreou told the seven-hour cabinet meeting, according to a statement released by his office.

"No one will be able to doubt Greece's course within the euro."

After the show of unity at home, Papandreou will later face the leaders of France and Germany, who summoned him for crisis talks in Cannes, before a G20 summit of major world economies, to push for quick implementation of the bailout deal.

Papandreou's gamble guarantees weeks of uncertainty just when the 17-nation currency area is desperate for a period of calm to implement the remedies agreed to overcome its sovereign debt crisis.

"This announcement took the whole of Europe by surprise," French President Nicolas Sarkozy said in a rare televised address on the steps of the Elysee palace in Paris. "The plan ... is the only way to solve Greece's debt problem."

Japan's finance minister, Jun Azumi, echoed his comments, as the Nikkei share average fell 2.2 percent on Wednesday. "Everyone is bewildered," he said.

Greek government spokesman Elias Mossialos said the referendum would take place "as soon as possible, right after the basics of the bailout deal are formulated", but would not be drawn on whether that meant before Christmas.

With the detail of the deal to keep Greece afloat still to be nailed down, the vote seems unlikely to take place before the end of the year and Greek officials said on Monday it was likely in mid-January.

Opinion polls suggest most voters think it is a bad deal, but much will depend on how Papandreou frames the debate, either on the bailout -- and hence the painful cuts that will follow -- or membership of the euro, which remains popular.

"He is blackmailing us," said Yannis Aggelou, a 50-year old sales manager at a steel company.

"If Greece accepts the burden and efforts required by the aid programs, if it wants to stay within the euro zone, then we will support it," Schaeuble said.

Papandreou said Greece's partners would support its policies and urged the G20 meeting in Cannes to agree policies that "make sure democracy is above market appetites".

But his move is bound to embarrass G20 host Sarkozy as he tries to coax big emerging nations such as China or India into throwing the euro zone a financial lifeline.

"Our assessment of the situation is, let them (euro zone leaders) make a credible assessment of the solvency issue, try to sort out those problems, and thereafter supplementary financing could be considered," Indian Finance Minister Pranab Mukherjee said.

Papandreou's most immediate hurdle is the parliamentary confidence vote on Friday. Lawmakers begin debating at 1600 GMT on Wednesday.

"We believe the government will once again win a vote of confidence in order to proceed with its plans," government spokesman Angelos Tolkas told reporters. "We will not back down on anything we have to do to save the country."

Six senior members of Greece's ruling PASOK socialists, angered by Papandreou's decision to call a plebiscite on the rescue package, said he should make way for a "politically legitimate" administration.

During the cabinet meeting that wrapped up around 3 a.m. after seven hours, some ministers questioned the timing of the referendum and criticized the fact they had been kept in the dark -- even the finance minister had not been told -- and a handful were openly against it, government sources said.

"I think this was the wrong decision and we must take it back," one minister was quoted as saying. "We must not risk our position in the euro."

A leading PASOK lawmaker earlier quit the party, narrowing Papandreou's slim majority to 152 of 300 seats, and several others called for a government of national unity followed by a snap election, which the opposition also demanded.

Papandreou needs 151 votes to enact the referendum. If any of the dissenters votes against, it cannot be held, and there is still plenty of dissent.

"For the first time we are admitting publicly that our policy lacks legitimacy," one minister said he told the meeting, speaking to reporters on condition of anonymity.

Doubt about Europe's ability to contain the debt crisis has once more sent investors fleeing from riskier assets across the world. Asian shares fell and the euro hovered near three-week lows against the dollar on Wednesday.

U.S. stocks tumbled more than 2.5 percent and European shares posted their biggest one-day loss in more than a month on Tuesday.

The risk premium on Italian bonds over safe-haven German Bunds hit a euro-lifetime high on Tuesday, raising Rome's borrowing costs to levels above 6 percent that proved unsustainable for Ireland and Portugal.

European bank shares dived on fears of a disorderly Greek default and the Athens Stock Exchange suffered its biggest daily drop since October 2008, with the general index shedding 7.7 percent.

Greece is due to receive an 8 billion-euro IMF/EU aid tranche in mid-November, but that is likely to run out during January, around the time of the referendum, leaving the government with no funds if there is a "no" vote.

Dutch Finance Minister Jan Kees de Jager said the IMF might have difficulty paying out that tranche because of the looming referendum. "I can imagine it will be difficult for the IMF to decide about the tranche but there will be uncertainty ... it is problematic," he told the Dutch parliament.