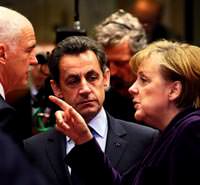 The leaders of Germany and France told Greece on Wednesday it would not receive another cent in European aid until it decides whether it wants to stay in the euro zone.

They also made clear that saving the euro was ultimately more important to them than rescuing Greece.

After emergency talks with Greek Prime Minister George Papandreou, German Chancellor Angela Merkel said: "We would rather achieve a stabilisation of the euro with Greece than without Greece, but this goal of stabilising the euro is more important."

French President Nicolas Sarkozy hammered home the same message, telling a joint news conference with Merkel: "Our Greek friends must decide whether they want to continue the journey with us."

Papandreou outraged European partners and caused panic on financial markets by announcing on Monday that Greece would hold a referendum on a second bailout plan negotiated with euro zone leaders last week.

The Greek leader, looking chastened after a torrid dinner with European Union decision-makers that Merkel called "tough and hard" on the eve of a summit of G20 major world economies, said the plebiscite would take place around Dec. 4.

"It's not the moment to give you the exact wording, but the essence is that this is not a question only of a programme, this is a question of whether we want to remain in the eurozone," Papandreou said.

Despite opinion polls showing a majority of Greeks, weary of two years of deepening austerity, think the bailout package was a bad deal for Greece, he said he expected more support from the wider population than he could muster in parliament.

"I believe the Greek people are wise and capable of making the right decision for the benefit of our country," he said.

Sarkozy and Merkel said euro zone finance ministers would meet next Monday to speed up decisions on leveraging the euro zone's rescue fund to build a firewall to protect other weaker members of the 17-nation currency area.

The EU and IMF said Greece would not receive an urgently needed 8 billion euro aid instalment, due this month, until after the vote because official creditors wanted to be sure Athens would stick to its austerity programme.

This was after the Greek leader sent a letter to EU leaders saying he wanted to negotiate the details of the second package before the referendum, they said. The letter angered European officials, raising the level of mistrust towards Greece.

Papandreou said Greece had enough money to keep running until mid-December, when it has to redeem more than 6 billion euros in debt.

Sarkozy's office said several euro zone leaders attending the G20, including the Spanish and Italian prime ministers, would meet on Thursday morning in Cannes to review the crisis.

In fresh signs of the market turmoil unleashed by the Greek move, the euro zone's EFSF rescue fund, which lends money to troubled member states, was forced to put on hold plans to raise 3 billion euros in the bond market.


Asian G20 members piled pressure on Europe to tackle the crisis before it wreaks serious harm on the world economy.

China's deputy finance minister, Zhu Guangyao, said he hoped the uncertainty over the Greek referendum could be contained, adding that Beijing could not consider investing more in the euro zone's bailout fund given the lack of detail on proposals to leverage it.

South Korean President Lee Myung-bak said the G20 must act swiftly and boldly to contain the crisis, which was spilling over to the rest of the world.

If Papandreou loses the referendum, Greece faces a disorderly default which would hammer Europe's banks and threaten the much larger economies of Italy and Spain, which the bloc may not have the means to bail out.

Doubt about Europe's ability to contain the debt crisis has once more sent markets into a spin and put Italy firmly in the firing line.

The risk premium on Italian bonds over safe-haven German Bunds hit a euro-lifetime high on Tuesday, despite European Central Bank buying of its bonds.

Italian Prime Minister Silvio Berlusconi scrambled to come up with measures to placate markets, holding an emergency cabinet meeting to accelerate budget reforms amid mounting calls for his resignation.

Ireland's finance minister said the ECB would be forced to pledge "a wall of money" to buy bonds, something many of its policymakers are deeply uncomfortable about.

Until the Greek situation is clearer, last week's package of measures is likely to be in limbo, leaving the ECB as the only bulwark against market attacks.

The head of Germany's banking association, Michael Kemmer, said agreement on a 50 percent writedown of Greek debt by its private creditors would have to wait. "I can't imagine a debt exchange taking place before the referendum," he said.

Centre-left newspaper Eleftherotypia described the prime minister on its front page as "The Lord of Chaos". Ethnos, another pro-government paper, called the referendum "suicidal".