‘Europe should learn a lesson’ 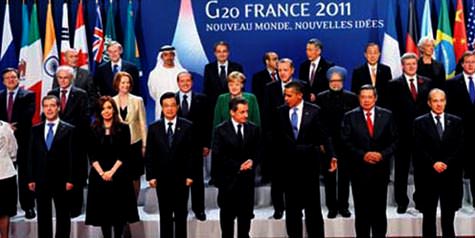 In 2001, Turkey waited at the IMF’s door for a billion dollars worth of aid and would look to developed countries with envy. Ten years later, Turkey is teaching a lesson in economy at the G20 summit. The richest businessmen from 20 different countries have asked Prime Minister Erdoğan to reveal the secrets of Turkey’s economic success.

Turkey, which ten years ago was referred to by the IMF as the 'sick man' and was in need of a billion dollars in aid, is now able to offer a lesson to the world's most developed nations.
Prime Minister Recep Tayyip Erdoğan drew attention to the fact that the debt stock in developed nations is on the rise, that unemployment has increased and the speed of growth has slowed, and stated to the G20 nation members; "While devising your economic program remain realistic, reserved and consistent." Erdoğan called on the nation representatives to, "not create a factitious budget." Stating that the policies instilled in 2008 managed to successful keep Turkey at bay from the negative outlook of the global economy, Erdoğan went on to state; "Turkey's experience clearly depicts how it is possible to simultaneously conduct fiscal discipline and strong growth."
Turkey's past ten years of transformation was used as the basis for the Prime Minister's address which posed as a lesson to G20 nations. Turkey, which in 2001 saw a 5.7 regression, a public outstanding debt of up to 77.9% and a current account deficit reaching 14.4, is now leaping bounds ahead of the world's most developed economies. While in the U.S., 2.6% of growth is anticipated, in the Euro Zone that figure is 1.7% and in Japan 0.5%, in Turkey, growth expectations have been set at a whopping seven percent. The United States, which ten years ago sported a public outstanding debt figure of 56.4%, will practically be doubling that number this year, whereas over the past ten years, Turkey has managed to drop outstanding debt down by half. While European nations seem unable to adhere to the Maastricht criteria, set up by themselves, in ten years' time, Turkey has successfully dropped outstanding debt from the 77.9 percentile to 39.8 percent. Ten years ago, Turkey would have had one of the highest account deficits, whereas this year with a practically equal budget figure the nation has become one to inspire envy from developing nations.
ERDOĞAN: BE REALISTIC; DO NOT MAKE CONCESSIONS
During the B20 Economic Policy Session held at the G20 meeting, Prime Minister Recep Tayyip Erdoğan stated, "Europe should learn from us. While nations prepare their economic programs they must ensure to not make any concessions on being realistic, reserved and consistent." Noting that periods of economic crisis can sometimes be perceived as an opportunity, Erdoğan stated that Europe needs to learn a lesson from Turkey. Stating that Turkey's star continues to shine with each day that passes, Erdoğan stated, "Rising market economies like Turkey, will in upcoming years take on a generator role for economic revival."
UNEMPLOYMENTOBSTRUCTS STABILITY
In terms of the future of global economy, there are still a series of very significant risks and difficulties that must be surpassed stated Erdoğan, who went on to mention that the high public debt and financial sector issues suffered by developed countries and especially the European Union coupled by the high levels of unemployment and global imbalances, continue to be the main obstacles to stability and strong global recovery. Touching upon the importance of cooperation between the public and private sector, Erdoğan stated, "This cannot be put into a corner, it carries significant importance. We do not consider the public solely for assigning public servants."
A MESSAGE FOR THE PRIVATE SECTOR
Erdoğan also delivered a message to the private sector. "What befalls you is to continue to produce and make new investments. If assessments are done well, times of economic crisis could turn into an opportunity." Erdoğan called on CEO's to make investments, and stated; "I say come. Turkey is a safe port."