Greek PM wins vote however era comes to an end 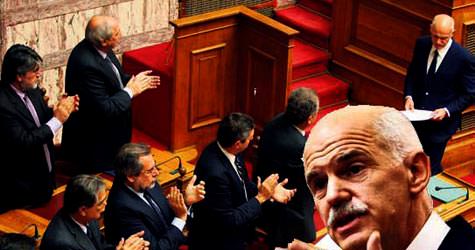 But the nation remained mired in political, economic and social turmoil and Papandreou signaled he would stand down, calling for a new coalition to ram the 130-billion-euro ($179 billion) bailout deal through parliament and avoid the nation going bankrupt.

Papandreou's socialist government won with 153 votes in the 300 member parliament, and a rebellion by some dissidents in his PASOK party failed to materialize after he indicated that his term as prime minister was close to an end.

"The last thing I care about is my post. I don't care even if I am not re-elected. The time has come to make a new effort ... I never thought of politics as a profession," he told parliament before the vote.

Papandreou said a coalition government should secure the approval of the EU/IMF bailout deal, the nation's last financial lifeline, which is also the euro zone's central plank to prevent economic crisis devastating the bloc's bigger economies.

The leaders of France and Germany told Papandreou this week that Greece would not get a cent more of aid if Greece failed to approve the bailout, meaning that the state would run out of money in December.

Papandreou told parliament that he would go to the Greek president on Saturday to discuss formation of a broader-based government that would secure the bailout, adding that he was willing to discuss who would head a new administration.

Papandreou dismissed demands for rapid elections as championed by the opposition. "Elections at this moment not only equal disaster but could not take place in the best interest of the people," he said.

"There is one solution. To support the (EU bailout) deal with a multiparty approach, without elections, with a strong government."

Masamichi Adachi, senior economist at JPMorgan Securities Japan, said the main concern was what would happen when international lenders returned to Athens in the coming months to assess the progress of the austerity plan and "they find them failing again."

"This is just pushing away the timing of the real problem. Of course it's welcome that Greece didn't blow up today, but it doesn't solve the problem."

Greece has been racked by torment since soon after Papandreou won power in 2009 and revealed that the real budget deficit was three times bigger than original estimates put out by his conservative predecessor.

International investors took fright, Greece's borrowing costs soared and Papandreou was forced to go cap in hand last year to the only bodies still willing to lend at affordable rates -- the European Union and IMF.

In return they demanded wave after wave of spending cuts, tax rises and pension cuts which provoked widespread protests on the streets on Greek cities, with bloody clashes between demonstrators and riot police in Athens.

On financial markets, analysts said Papandreou's victory had been Pyrrhic, and many ordinary Greeks said they were disenchanted with Byzantine political wrangling that was not addressing their basic need for jobs and cash.

"Even though he has won the vote, he engaged in a game of brinkmanship ... All that means to me is that his days in power are numbered," said Jurgen Odenius at Prudential Fixed Income, in Newark, New Jersey.

"At least, though, the worst has been avoided, where no new government was formed and Greece gets pushed into default. So at least we're back to where we were before."

Sources said Finance Minister Evangelos Venizelos has won the backing of leaders of some smaller parties to support a new coalition that he would head. The new government would call early elections in a few months after the bailout had been secured, sources close to the deal told Reuters.

The leaders of the far-right LAOS party and another center-right party indicated after Papandreou's speech that they would cooperate in a new coalition.

In parliament, Venizelos said a new government should rule until next February and then call elections.

Opposition leader Antonis Samaras counted his New Democracy party out of the coalition, saying Papandreou had spurned his call for a national unity government. "Mr Papandreou rejected our proposal. The only solution is elections," he said.

Papandreou provoked uproar at home and abroad on Monday when he announced a referendum on the bailout, agreed by euro zone leaders only last week.

Under heavy domestic and international pressure, he backed down on a vote which could well have rejected the deal, potentially sinking euro zone leaders' attempts to stop the debt crisis devastating economies such as Italy and Spain.

The government officially announced earlier on Friday that the referendum would not go ahead.