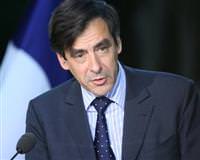 France will announce about 8 billion euros of budget cuts and tax hikes for 2012 on Monday, imposing more pain on voters to protect its credit rating and curb its deficit in a gamble for President Nicolas Sarkozy six months from an election.

Sarkozy's center-right government says extra savings are urgently needed to keep France's finances from going off the rails, since it cut its growth forecast for next year to 1 percent from 1.75 percent last week.

The announcements could be make-or-break for Sarkozy as he tries to reassure financial markets and ratings agencies without costing him his re-election chances with French voters.

The measures, to be unveiled by Prime Minister Francois Fillon, come on top of 12 billion euros in savings announced just three months ago.

Le Monde newspaper said he would flag cuts totaling up to 17 billion euros by 2016.

Like other European countries, France is struggling to keep its public finances under control and contain its debt without triggering a sharp drop in consumer spending, a cornerstone of the economy, or sparking protests of the scale seen in other countries such as Greece.

Ratings agencies have been hinting they could cut France's prized top credit rating because of its slowing growth and its potential liability for the cost of bailouts in the European debt crisis.

Without ever mentioning the word "austerity," ministers from Sarkozy's center-right government spent the weekend defending the need for fiscal vigilance amid fears of mounting debts in Western states.

"The 2012 budget will be one of the most rigorous budgets that France has seen since 1945," said Fillon on Saturday, adding that the country's "hour of truth has arrived."

Ministers have given no concrete details on where the cuts would come from, but said they would be "equitable."

Newspapers reported that the transition to France's higher retirement age of 62 would now take place in 2016 or 2017, rather than 2018 and Le Figaro said on Monday automatic rises in welfare benefits could be hit in a budget adjustment that might total 10 billion euros.

Securing a rise in the retirement age to 62 from 60 was a key political victory last year -- but a highly unpopular move -- for Sarkozy, who said it was necessary to keep France's ballooning pension deficit in check.

Speeding it up would mean saving billions in coming years by delaying payments to retirees.

The government might also slap a corporate tax on businesses with annual revenues over 500 million euros, the paper said.

Baroin denied speculation that French workers would be asked for an additional "day of solidarity" in which salaried workers work for free one day, their pay going to the state.

France is trying to reduce its budget gap from 5.7 percent of GDP this year to 4.5 percent next year. It hopes to reach an EU-mandated limit of 3 percent of GDP by 2013.

Preserving France's coveted AAA credit rating through deficit reduction plans has been a key goal of Sarkozy, who in recent months has cast himself as a responsible steward amid the turmoil of the seemingly unending euro zone crisis.

The cuts come at a politically sensitive moment for a leader whose popularity ratings are low six months from a presidential election in which he is widely expected to seek a second term.

Socialist presidential challenger Francois Hollande said in an interview in Liberation newspaper that the orders from Sarkozy to find some 6-8 billion euros in savings might even be insufficient and the newly reduced growth forecasts still overly optimistic.

"It mustn't be forgotten that 75 billion euros in tax revenues evaporated during Sarkozy's five-year term through tax breaks for France's largest companies and the best-off households," he said.