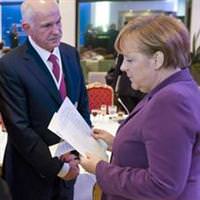 Europeans are closely following the latest nail-biting chapter unfolding in the Greek debt crisis, trying to calculate how a pullout of the euro zone by the heavily indebted country would impact on their own livelihoods.

the Greek government teetering on the edge of collapse and fears a euro zone exit would trigger a domino effect through Spain, Portugal and Italy, Europeans are split on whether Greece should be cut loose.

"If Greece leaves the euro the same thing that happens there will happen to other countries and in Spain's case, it will be even worse," said Victor Valentin, a 36-year-old surgeon in Madrid.

Newspapers and television channels across the continent are crammed with analysis of the Greek debt debacle, and in countries such as Spain, people from all walks of life have become experts on the crisis, which has contributed to the country's painful 21.5 percent jobless rate.

"Greece leave the euro? Mathematically speaking they should leave, and the sooner the better. And Spain should too. We should return to the peseta. Everything used to be cheaper and they've cut my salary," said Jose Perez Salinas, a 67-year-old Spanish waiter.

German Chancellor Angela Merkel and French President Nicolas Sarkozy have conceded for the first time Greece might end up having to leave the currency club it joined a decade ago, although the consequences would prove devastating.

Many blame Greek politicians for exacerbating the crisis, despite Greek Prime Minister George Papandreou dropping plans for a referendum on the 130 billion euro ($179 bln) bailout which threw Greece's euro zone membership into jeopardy.

In Germany, which has shouldered the heaviest burden of massive Greek bailouts, many have run out of patience. Some politicians have called for Greece to leave the euro zone before it further endangers their prosperity.

Germany's top-selling Bild said in a Friday editorial: "The euro countries and Greece have to put an end to this now; with or without a referendum, Greece needs to leave the euro zone at least for the time being ... before the rest of the world writes off Europe because it can't even resolve the Greek problem."

A representative poll for the ARD network by the Infratest-dimap polling institute found 82 percent of Germans believed Greece should leave unless it took the bailout.

"We can only hope that Greece's governing politicians finally grasp that it is not just about switching their leader but they have to hammer out a fundamentally different approach. The future of their country -- more than that -- the future of the whole euro zone, is at stake."

Julius Prausmueller, a 28-year-old working at a hot-dog stand in central Vienna suggested Greece, Italy and Portugal should be leave the euro zone in the longer term.

"Of course, you can't just leave a country like Greece in the lurch during a crisis. But the question is -- how do you help a country like that?" he said.

"They brought on nearly all of the problems themselves and why should we help them when they still haven't got around to the idea of paying their own taxes?"

Greeks, already exasperated by a seemingly endless wave of pay cuts and tax hikes, watched the latest political drama unfolding with a mixture of despair and disbelief.

"We are suffering from austerity and this man is smiling in parliament and telling us the referendum plan was just a joke," said Alexandra Rouva, a 27-year-old Greek who has been unemployed for more than a year.

"Well, this is not the right time for stupid jokes. He cannot play with our lives."

Turkey, Greece's old rival, has been following the drama with keen interest, as negative economic developments in its neighbor and the rest of Europe adversely affect its economy.

Advertise | AdChoicesAll but spurned in its quest to join the European Union, Turkey's booming economy stands in stark contrast to Europe's financial woes. But it is deeply linked to the 27-member bloc, which buys around half of its exports.

"The sick man of Europe," read a front-page Daily News headline, with a photo of Papandreou in front of Merkel.

"This crisis has proved that Turkey, with its strong economic indicators, does not need the EU," said Emre Kopan, 35, who works in the financial sector. "It is for Turkey's own good to stay out of the EU."

In Poland, an EU member which has yet to join the single currency, the Greek drama has prompted many to rethink their aspirations of eventually swapping zlotys for euros.

"I am pleased that Poland is not in the euro zone. Should we join? I am not an economist but if you look at the exchange rate right now of the zloty to the euro it is not especially favorable," said Marlena Sojka, a 57-year-old receptionist.

"I don't think I would be able to survive on my salary if Poland adopted the euro."