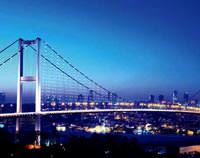 According to research conducted by 373 Japanese firms, Turkey has risen from fifth most promising market up to third.

While the serious crisis continues in the European Union, Japan's Nihon Keizai Shimbun newspaper has announced that Turkey has risen to the top third spot of most promising markets. According to the news, Japan's External Trade Organization (JETRO) based the decision on a 2011 survey conducted by firms with activities in Europe and Turkey. The report also pointed out that Russia remains in the top spot as it has done so for the past five years. The survey was conducted on 373 Japanese firms that have commercial activities in both Europe and Turkey during the months of July and August 2011. The following assessment was included in the survey; "In order to surpass the uncertainty of the course of the heated economy in Greece and Southern European countries due to the debt crisis, Japanese firms have as a resultetaken further notice of sales figures in developing markets in the Europe region which has therefore resulted in the increase of Russia and Turkey's listing."
Last Update: Nov 08, 2011 4:42 pm