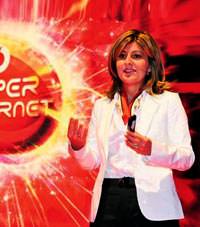 Vodafone lifted its full-year profit outlook on Tuesday as strong growth in emerging markets and robust trading in northern Europe more than offset weakness on the southern fringes of the euro zone.

The results were boosted by growth in India and Turkey and solid performances in Germany, Britain and the Netherlands. Vodafone raised its interim dividend by 7 percent on top of a special dividend from U.S. venture Verizon Wireless.

"They're really great numbers," analyst Will Draper at Espirito Santo said. "The revenue is strong in a quarter that we expected to be the weakest in the year.

"The fading impact of (regulatory cuts) from now onwards, in Germany especially, give us optimism that service revenue growth and EBITDA margin will improve further in the second half."

Shares in Vodafone were up 2.4 percent to 176.95 pence in early trading and were the top gainers in a European telecoms index up 1.7 percent.

Part of the growth was driven by a strong performance in India, where service revenue accelerated to 20.1 percent in the second quarter from 16.8 percent in the first, due to a larger customer base making more calls and accessing the Internet.

The group was also boosted by strong demand around the world for data services, enabling customers to access the internet on the go via smartphones, and by signing up more corporate customers.

The growth in data revenues was particularly strong in emerging markets, where many consumers do not have access to fixed-line internet services and even held up in the tough Southern European markets.

But the group showed it was still facing tough conditions in southern Europe. Its core profit margin slipped 0.6 percent points due to price cuts in Spain, although at 32.0 percent it was still ahead of a 31.6 percent Reuters poll forecast.

In Italy, a decline in organic service revenue accelerated to 3 percent in the second quarter from 1.5 percent in the first, and Vodafone took an impairment loss of 450 million pounds ($720 million) in relation to its Greek business.

"In the first half of the year we have made good further progress in executing our strategy of delivering growth and value," Chief Executive Vittorio Colao told reporters.

"Although the macro economic outlook is uncertain the diversity of our business gives us the confidence that we will continue to perform strongly in the second half of the year."

On the key industry metric of group organic service revenue, which relates to the provision of ongoing services, the group was up 1.3 percent in the second quarter, better than consensus of 1.1 percent.

"Within that, the really encouraging thing was Europe," said Espirito Santo's Draper.

Organic service revenue in Europe, which accounts for 70 percent of the group, was down 1.3 percent, flat on the first quarter and comfortably ahead of forecasts at 1.7 percent.
"In summary a very solid first half with second quarter growth coming through more strongly than expected in Europe and management guidance more confident for the full year," Deutsche Bank said in a note.

"This helps justify the popularity of Vodafone at this time as a relatively safe haven despite various macro concerns, and we reiterate our Buy rating."

The group reiterated its outlook for free cash flow of 6 billion to 6.5 billion pounds, despite missing forecasts due to what it described as a timing issue.

Vodafone has reported ahead of most of the large European telecom firms this quarter, although France Telecom said at the end of October that it had nudged up its annual cash flow target due to tight cost control.