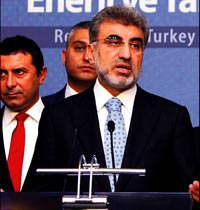 Turkey may review its supplies of electricity to Syria if Damascus does not change course, Turkish Energy Minister Taner Yildiz said on Tuesday.

"Right now we are supplying electricity there (Syria). If this course continues, we may have to review all of these decisions," Yildiz told reporters.

Syria produces more electricity than it consumes and it has links with other countries such as Jordan and Lebanon so the impact of Turkey pulling the plug would probably be limited. However, ending a supply route that began in 2006 would send a strong symbolic message about its disapproval and willingness to impose further sanctions. Turkey is Syria's largest trading partner with bilateral trade worth $2.5 billion in 2010, and investments by Turkish firms in Syria reaching $260 million.
Last Update: Nov 16, 2011 1:39 pm