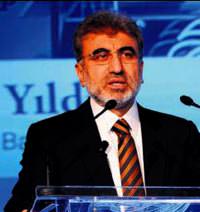 Turkey has reached an agreement with Shell on a farmout to explore for hydrocarbons in the Gulf of Antalya in the Mediterranean, which they will sign tomorrow, Energy Minister Taner Yildiz said late on Monday.

He said in a speech to parliament's budget commission that Turkey would also sign a deal with Shell on shale gas production in southeast Turkey.

Ankara also planned to start work in December on farmout explorations in the Mersin and Iskenderun regions of the eastern Mediterranean, he said.

He added that the first well in the Iskenderun gulf was planned to be opened in 2013.