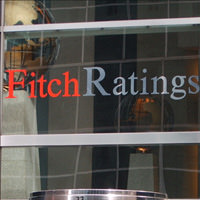 Fitch Ratings has revised the Outlooks on the Republic of Turkey's Long-term foreign and local currency Issuer Default Ratings (IDR) to Stable from Positive and affirmed the ratings at 'BB+'. The agency has also affirmed Turkey's Short-term foreign currency IDR at 'B' and Country Ceiling at 'BBB-'.

"The revision of the Outlook to Stable reflects an increase in near-term risks to macroeconomic stability as Turkey faces the challenge of reducing its large current account deficit and above-target inflation rate against the background of deterioration in the global economic and financing environment," says Ed Parker, Managing Director in the EMEA Sovereign group at Fitch.

Turkey's macroeconomic performance has been very volatile as it has a low savings rate and has been unable to grow robustly without generating major imbalances. In Fitch's view, the economy 'over-heated' in H111, with bank credit surging by 36% yoy, fuelling double-digit GDP growth, rising inflation and a widening in the current account deficit (CAD) to USD78bn in the 12 months to September 2011 (which Fitch estimates would be the second highest in the world after the US).

Economic activity and credit growth have started to slow in recent months. Fitch's base case is that GDP growth will ease to 2.2% in 2012 from 7.5% in 2011, before recovering to 4.5% in 2013, inflation will decline and the CAD will narrow. However, Turkey's large external financing requirement leaves it vulnerable to the deterioration in the global outlook and there is a downside risk of a less benign macroeconomic adjustment.

Fitch forecasts the CAD to increase to 9.8% of GDP in 2011 from 6.5% of GDP in 2010, well above the ten-year 'BB' range median of 2%, before easing to 7.6% in 2012. Year-to-date CAD financing has been dominated by short-term and portfolio debt inflows and running down foreign assets, leaving the country vulnerable to the worsening in global financial conditions. In 2012, Fitch estimates that Turkey's CAD, amortisation on medium and long-term external debt plus stock of short-term debt will be around USD194bn, compared with foreign exchange reserves of USD93.6bn at end-September 2011. In addition, USD17bn of non-residents' holding of local currency debt falls due. Turkey's net external debt ratios are above the 'BB' range median and on an upward trend.

Inflation has been significantly higher and more volatile than for 'BB' range peers. Fitch forecasts inflation at 9.2% at end-2011, well above the central bank (CBRT) target of 5.5%, which would be the fourth time the CBRT has missed its target in six years. Facing challenging and volatile global conditions, the CBRT has deployed an activist and unorthodox policy mix, including low real interest rates. Yet the large lira depreciation, strong credit growth, high inflation and the widening in the CAD mean the extent to which it has helped to support macroeconomic and financial stability is debatable.

Turkey's strong and improving public finances are a key support for its ratings. Fitch forecasts the general government budget deficit will decline to just 1.3% of GDP in 2011, from 3.3% in 2010 and 5.8% in 2009, albeit buoyed by the booming economy. Public debt dynamics are highly favourable due to the government running primary budget (before interest payments) surpluses, and trend GDP growth above the real effective interest rate. The agency forecasts general government debt to decline to 40% at end-2011 from 42% of GDP at end-2010 and continue decreasing over the medium term. Lower interest costs and a lengthening in the maturity of debt have cut Turkey's fiscal financing requirement, while relatively deep local capital markets provide financing flexibility.

Turkey's ratings are also underpinned by a sound banking sector, which is well capitalised, profitable and moderate in size, and has a low ratio of non-performing loans, a loan/deposit ratio below 100% and minimal FX lending to households. GDP per capita is well above the 'BB' range median, while the business climate and governance are stronger, according to World Bank indicators. Conversely, political risk weighs on Turkey's ratings. It ranks below the 'B' range median in the World Bank's governance indicator for "political stability".

Evidence that Turkey can attain a 'soft landing', with GDP growth returning towards trend, coupled with greater confidence that inflation is on a path towards its target rate and the CAD is narrowing to a more sustainable rate could lead to an upgrade.

However, severe macroeconomic or financial instability such as a 'balance-of-payments crisis' and recession or a failure to secure disinflation, for example triggered by external shocks or domestic policy mistakes could lead to negative rating action.