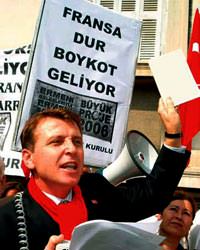 French President Sarkozy’s proposal to spread the ‘genocide denial’ bill throughout EU nations has angered Turkish citizens. The boycott ring initiated following the bill being brought to the senate, which has led to a 30 percent drop for French goods, continues to widen.

Turkey is preparing for one of the largest scale public boycotts to transpire in recent years. The public boycott, which began when French President Nicolas Sarkozy presented the 'genocide denial' bill to the French Senate has widened following Sarkozy's proposal to spread the bill throughout EU nations.
The objective of the boycott, which has reached to cosmetics, textiles, automotives and food products, is to make the French economy pay a billion dollar bill. According to Turkish Tradesmen and Artisans Confederation Chair Bendevi Palandöken, the initial reaction to the bill led to an almost 30 percent drop in French food and beverage products, however Sarkozy has now crossed the line with his intentions to bring the bill which involves a prison sentence for denial of the claims to other EU nations.
Warning that if this is pursued then the limits of the boycott will also be surpassed, Palandöken stated the following: "For a President who is against Turkey's growth to propose that such an inane bill be spread throughout the EU in order to gain favor in an election is unacceptable. When the bill was first presented to the senate, we sent out a notice to our unions in 81 provinces. The notice contained a list of all French goods in the market. With a single instruction from us, the effects of a boycott on French goods could rise to unbelievable proportions."

SOCIAL MEDIA GATHERS HUNDREDS OF THOUSANDS OF SUPPORTERS
Reactions have already begun to surface in the cyber world. Citizens have organized amongst themselves as well as through utilizing social media in order to begin a new boycott on cosmetics, textiles, automotives and food products. A number of campaigns have surpassed the hundreds of thousands of supporters through social media. There are lists of French products and their sales volumes in Turkey, which are explained in detail. The numbers of those offering their support to the campaigns continues to multiply each day.

A STRATEGIC BOYCOTT PLAN
Beginning with the Consumers Union and since then having spread to a number of civil society organizations, preparations are in place for the first time ever to conduct a strategic boycott against France. NGO administrators express that the true objective is to affect France's economy and state, "We are not centering on firms that manufacture and create employment in Turkey. Our objective is to hone in on products which reap in billions in imports yet do not create any added value. Very soon, we will be starting off an extremely effective campaign."
A billion euros raked in from commission…
The most effective boycott of French products has been staged by Istanbul's Chamber of Restaurants. Up to 15,000 restaurateurs, snack bars and pastry shops have decided to boycott French firms which use meal card such as Sodexo, Ticket and Multinet. Istanbul's Chamber of Restaurants Chairman Sait Karabağlı states, "13,500 members have decided to stage a boycott on meal cards. We are against the eight to ten percent commission applied to meal cards. In lieu of meal cards, the money should be deposited in bank accounts in addition to salaries and then the commission would be lifted." French meal cards alone collect one billion euros in commission annually in Turkey."
Disposing with French products…
Importing firms have begun presenting their French products on hand to be exchanged in an attempt for disposal. According to Sistem Barter Executive Board Chairman Orhan Besle, cosmetic and textile products are what are primarily up for exchange, "A price decrease between 15 to 30 percent has been implemented. In order not to incur risk, they are presenting the products on hand at a discount to be exchanged for vehicles and property."
An era of domestic products in cosmetics
The situation is a little bit different when it comes to cosmetic products in which France tends to have the lion's share. With consumer's now preferring to purchase domestic products rather than French cosmetics following the surfacing of the bill, French brand products are being sold at discounts or two for the price of one deals. However, following Sarkozy's new EU proposal, what will now transpire is of much curiosity. Turan Özbahçeci , the General Manager of Fayda AŞ, which primarily deals in domestic products states, "In an attempt to surpass the boycott, French products are constantly being discounted and placed on the shelves with campaigns, however we will not be duped."
Domestic cosmetic products sales firm PNR Kozmetik's Executive Board Chairman Fevzi Pınar states, "By discounting products at the New Year, French brands attempted to penetrate the initial boycott, however the middle class and those who spend the money are especially even more sensitive to these sorts of issues. French products will experience a serious loss in sales." Pınar also expressed that the reaction will be even more effective with state support and that it may be deemed necessary to impose obstacles for French products to be brought through the borders.