PM Erdoğan: We don’t take the interest lobby to heed 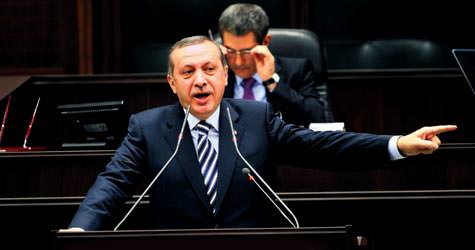 Explaining that four years ago the interest lobby exerted pressure for an IMF deal, Prime Minister Erdoğan states, “We didn’t do it then and we haven’t experienced any problems.” Erdoğan also says that 2012 will be an even better year than 2011 and announced that the IMF debt has dropped to 2.9 billion dollars.

Speaking at the AK Party group meeting, Prime Minister Recep Tayyip Erdoğan directed his words at the 'interest lobby'. Noting that there are six European nations in line for a stand-by agreement with the IMF, Erdoğan states, "What did the interest lobby say to us? 'You are running late; please reach a stand-by agreement.' What happened? We have entered into the fourth year and we didn't do it, are there any problems? No, because we don't have such problems. Quite the contrary in fact, we take on the weight transferred to us and pay it back on time in order to close our IMF debt." Erdoğan also noted that the 23.5 billion dollar IMF debt from 2002 has now dropped to 2.9 billion dollars.

Explaining that all indicators which incurred partial damage in the global crisis which kicked off in 2008 have begun to follow a normal course, PM Erdoğan explains that they will not halt their cautious approach to the European crisis nor will they become spoiled. Erdoğan states, "There is no neglecting of one side and raising the other side up. All sides need to be lifted in the same manner. We are very closely tracking developments in Europe. Hopefully, we will be closing 2012 as a better year than 2011. While the Euro zone awaits contraction, we will continue to see growth this year."

INVESTMENTS WILL BE FRUITFUL

Stating that investments will continue, Prime Minister Erdoğan comments, "Some are afraid, some say of we continue to invest at such a critical time, what will happen… It will be fruitful and nothing else."

Erdoğan also explained that when they came to power, the Central Bank reserve was at 27 billion dollars including gold, however now that figure has reached 85.3 billion dollars.

"WOULD ANYONE BUY A REFRIDGERATOR IF THEY HAD NOTHING TO PUT INSIDE IT?"

Erdoğan shared information on the doubling of refrigerator sales since 2011, which have now reached 2,193,000 and stated that washing machine sales have reached 1,949,000. "It is pointless to discuss the number of refrigerator sales, what we need to talk about is what is inside of them. Would anyone buy a refrigerator if they had nothing to put inside it?" Erdoğan also went on to state that records have been broken in both automotive sales and export figures. Referring to the release of tTurkish Statistical Institute's official export figures, Erdoğan explained, "We have reached 134.9, in other words 135 billion dollars in exports. That is a historical record breaking figure for the Turkish Republic."