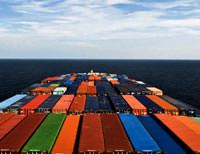 The 12.6 billion dollar figure announced for March exports came as no surprise to Economy Minister Çağlayan. “This figure is not an April Fool’s Day joke. Our 2012 target is to reach 150 billion dollars in exports.”

Turkey's Minister of Economy Zafer Çağlayan expressed that the March export figure of 12.6 billion dollars announced by Turkey's Exporters Assembly (TİM) Chairman Mehmet Büyükekşi is the highest figure for March ever seen in the history of the republic and is the second highest figure ever reached on a monthly basis.

Minister Çağlayan emphasized that this is not an April Fool's Day joke, but that the figure is actually in line with the 2012 target of realizing 150 billion dollars in imports. In addition, Çağlayan pointed out that both figures from the Turkish Statistical Institute and Turkey's Exporters Assembly prove that Turkey's exports continue to break records on a monthly basis.

EXPORTS TO LIBYA ON THE RISE

Emphasizing that with the settling down of nations which experienced Arab Spring, Turkey's exports have also been on the rise, Çağlayan noted that exports to Libya have increased by 658.3 percent compared to the same month the year prior and exports to Egypt also saw a rise by 102.4 percent. Çağlayan also mentioned that exports to Syria in the January to March period have dropped by 57.1 percent compared to the same period from the previous year.