A park for every neighborhood 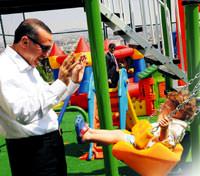 Under Prime Minister Erdoğan's order, the new urban renewal plans will include designating public parks for every neighborhood and district. In addition, the new development plan by the Ministry of Environment and Urban Development will also include bike paths and recreational areas.

SABAH has acquired the details behind Prime Minister Recep Tayyip Erdoğan's recent announcement of plans to "provide children cities with parks instead of piles of concrete."

According to the project prepared by the Ministry of Environment and Urban Planning, amendments to be made to the development plan law will include special attention paid to providing for children's sensibilities including areas of greenery.

Accordingly, parks will be designated for all of the nation's cities, counties, districts and neighborhoods and municipalities that do not involve the development of parks in proposals, will not be granted permission.

Although municipalities were required to provide parks in the past, according to the authority granted to the Ministry of Environment and Urbanization by the new legislation, municipalities may now be subjected to sanctions should they not fulfill the duty of providing recreational areas for residents. While the most important element of the project is the development of parks and areas of greenery for children, in addition the new code will also include regulations on providing recreational equipment based on the area population. From here on out, all residential areas will have neighborhood, district and county parks.

Due to unstructured development, areas of greenery within the city have been demolished, while due to the danger involved with being close to roads; children's playgrounds have practically disappeared. According to the new development plan however, establishing bike paths and parks will now take priority.

In addition to setting up recreational areas, where children can safely engage in physical activities, including basketball and football courts, bike paths will also be designated within cities.
Taking heed to the warnings that the current generation in Turkey is spending too much time in front of computers and less time engaged in physical activities, the Ministry of Environment and Urban Planning is now making it mandatory that all districts have city parks in which families can spend time with their children outdoors. These areas will be completely protected and will include recreational facilities in order for families to be able to have picnics and play sports.

Citizens requested and the Prime Minister made the orders

Ever since the start of talk of urban transformation, citizens have been pouring in requests to have areas where they can play with their children, which is why supposedly the Prime Minister has made this a priority. The ministry has relayed the sensitivity of the issue to municipalities that have begun engaging in renewal projects. Since then, the ministry refused to approve development plans which did not include a park or designated area of greenery by Istanbul's Tuzla Municipality, meanwhile Hadımköy, which plans to build a giant park, was granted development permission.