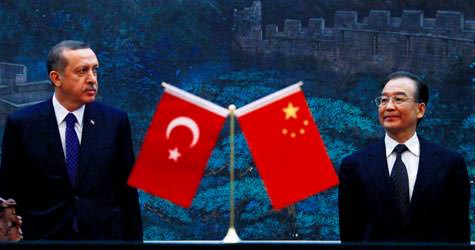 Turkey and China signed six agreements yesterday which will open the door to a number of collaborations including nuclear energy.

The first agreement dealt with the use of nuclear energy for peaceful purposes and was signed following meetings between Chinese Prime Minister Wen Jiabao and Prime Minister Erdoğan and their mutual committees. With the signing of this agreement, Turkey has completed all preliminary agreements for establishing a nuclear power plant signed with nations such as the USA and Russia. Followed was the signing of an agreement on collaboration between Turkey and China on nuclear energy. A memorandum of understanding on collaboration between the two countries was signed by Minister of Energy and Natural Resources Taner Yıldız. Meanwhile, due to an agreement signed with China's National Energy Agency, the decision was reached to begin negotiations on building Turkey's second nuclear power plant. Minister of Energy Taner Yıldız explained that they are conducting nuclear negotiations with three different nations on three different models. Yıldız explains that Russia is no longer a contender for the second power plant and states, "With the agreement signed with China from here on out both nations' establishments will be able to mutually share views and proposals."

A joint agreement was also signed between TRT, Turkey's state-run television station and China's CCTV. According to the agreement, Turkish television series broadcasted on TRT will be released in China while Chinese television programs will be shown on TRT.

One of the agreements made was between China's National Publishing Group and Turkuvaz Magazine Group and was signed by Chairman of the Executive Board Ahmet Çalık. According to the agreement, the printing and distribution of the Turkish-published China Today will now be supported by Çalık Grubu. In upcoming periods, there will be mutual newspapers exchanges as well as technical collaboration.