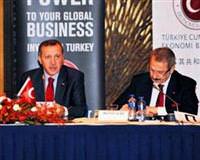 At a conference organized by the Prime Ministry Investment and Support Agency, Prime Minister Erdoğan invited China’s biggest firms to invest in Turkey.

Prime Minister Recep Tayyip Erdoğan met with CEO's from China's top 30 firms yesterday in Shanghai. In an address to the CEO's, Prime Minister Erdoğan explained that Turkey offers excellent investment opportunities for Chinese investors and that the Silk Road, holds historical significance for trade turnover spanning from Xian to Istanbul."We are now working on transforming the Silk Road into a railway system," states Erdoğan, who went on to deliver the following messages:

RECORD PROGRESS: "Over the past nine and a half years, our government has made record-level progress. In 2011, Turkey followed China as the second fastest growing economies at 8.5 percent. Our per capita national revenue reached 1,444 dollars at the end of 2011.

SECURE STRUCTURE: The 23.5 billion dollar IMF debt we incurred in 2002 has now dropped to 2.3 billion dollars. Our Central Bank reserves work to strongly protect Turkey from shocks. The reserves we took on at 27 billion dollars have now reached 92 billion dollars. We have ensured our banking and financing sector has obtained a secure and resistant structure against fluctuations.

WE STAND STRONG: We stand strong as we take strides towards advancement, while never abandoning precaution. Turkey continues to grow fast in the region, while also increasing its influence and power, however our economic collaboration with China does not accurately reflect this potential. Our joint trade volume at present is 25 billion dollars. This volume is unbalanced to Turkey's disadvantage and we need to work together to close this gap.

TAKE ADVANTAGE OF INCENTIVES: We have begun implementing a new incentive package. With this package, we now offer strong support for international investments. Our doors are open all the way for Chinese investors and we hope they can benefit from the incentives.

'We are focused on dropping the costs with nuclear energy'

Speaking to journalists on his final day in China, Prime Minister Erdoğan stated, "Vice President Xi Jinping and other authorities are in favor of developing economic relations. They expressed interest in being involved with the third Bosphorus Bridge, as well as in electricity and nuclear power. By establishing connections, I am hoping to bring Chinese capital into Turkey. Our nuclear efforts are entirely based on decreasing the cost of providing energy. This is solely for peaceful purposes. We have the resources and the opportunity to evaluate them."