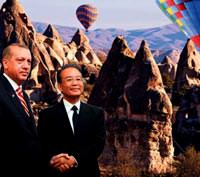 The Prime Minister’s trip to China has resulted in an increased interest in Chinese tourists. The high spending tendencies of Chinese tourists who come to Turkey on eight to ten day trips has drawn the interest of Turkey’s tour operators.

China, which sends 70 million citizens on international trips each year, has now become the most significant market in the tourism industry. The fact that this figure is set to grow paralleled by the nation's growing economy has peaked Turkey's tourism industry's interest in China.
With the renewed trust between both nations established during Prime Minister Recep Tayyip Erdoğan's recent trip to China, tourism experts in Turkey are now taking action geared towards promoting in China. Aristo Tourism, which opened their fifth branch in China in Urumqi, during the prime minister's visit, has now increased their target,
Mustafa Kartopu, Executive Board Member of Aristo Tourism, which has been bringing tourists from China to Turkey for 20 years now, states that out of the 100,000 Chinese tourists that come to Turkey annually, they are responsible for bringing out 25,000.
Expressing that due to the opening of the Ministry of Culture and Tourism's Beijing office, Chinese tourists are now well familiarized with Turkey, Kartopu states, "There is a class in the 100 millions in China that is prospering as a result of the economic developments. They like luxurious tours, shopping for brands and cultural tours. However, the rich tourists are not the only ones interested in cultural tours; middle class tourists are also interested. This accounts for hundreds of millions. This is a very important market", states Kartopu.

Kartopu goes on to explain that Chinese tourists tend to come on eight to ten day-long tours primarily to Istanbul, Çanakkale, Bergama, Izmir, Kuşadası, Pamukkale, Cappadocia and Antalya and states that their capacity for spending is higher than European tourists. Turkish Airlines offers flights to Shanghai and Beijing everyday and to Guangzou three times a week, Kartopu explains however that they are not able to accommodate for the demand and may be increasing the number of flights from Turkey to China soon.